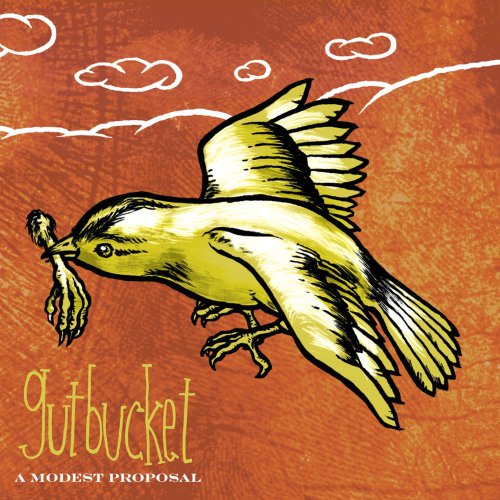 This (the band's fourth album) was the first I'd heard of Gutbucket, but it impressed me so that I immediately tracked down their second and third albums (Dry Humping the American Dream and Sludge Test, respectively) as well, both of which are equally impressive. I suppose it was inevitable that this aggressive instrumental quartet straddling the art-rock and free-jazz idioms with hints of Euro-folk, klezmer and 20th century classical all delivered with the edgy ferocity of punk would eventually end up on Cuneiform, where they rightfully belong. Yeah, I'm still looking for that first album too! The band features guitars, drums and bass, with alto and bari saxes, clarinet and bass clarinet, vibraphone, piano, Hammond, and an assortment of other keyboards (but no Mellotron, got that?) as needed. The saxes and clarinets are often overdubbed to an almost orchestral effect (think Grand Wazoo era FZ), but the guitars, bass and drums keep a grungy and aggressive face on the rhythmic undercurrent flowing through each of the ten cuts herein, and often blast right through to the surface in a complex and dizzying array of mathematical and melodic splendor. Even though each piece is composed, the band works together telepathically, applying layers of sound in an effortless way to achieve a solid improvisational feel, occasionally going over the edge to the brink of insanity. By all means check this out. Great fun, beginning to end.

Emily Bezar - Grandmother's Tea Leaves, Moon in Grenadine & Four Walls Bending – I read a review of Moon in Grenadine some time ago which described it as what you might get if Sarah McLachlan’s band indulged itself in a King Crimson fetish, so of course I had to have it. While...  (2000) » Read more