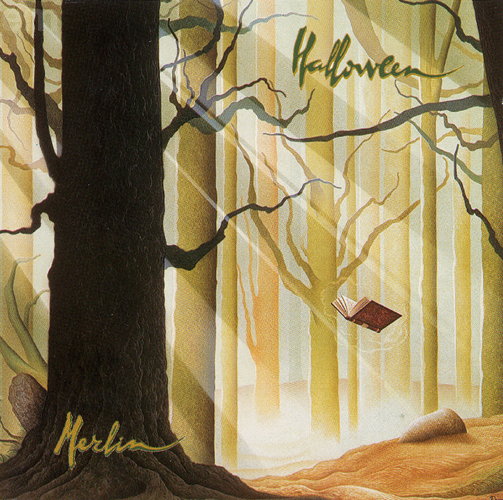 It's been a long time, four years in fact, since we've seen from this highly regarded French outfit. Laz was greeted with a lot of hype when it came out in 1990, it had a lot of people turning heads. To tell you the truth, I was less than enamored with either Laz or their debut; I felt that while some elements of their style were excellent, the overall feeling I got was that neither album flowed very well. Enter Merlin and a totally new sound. Female vocals, a string quartet, and horn section are all added to make this widest Halloween palate yet. Does it work? The answer to that is Yes! Not since Änglagård's Hybris has there been an album of such remarkable cohesion, such incredible dynamics, such memorable melodies and riffs, and such an awesome production. In fact, while Änglagård took much of their music from the likes of mellow Genesis, or riffs from Shylock or Cathedral, this Halloween album is brimming to the full with utter originality. A couple pointers must be stated — the overall cohesion especially with the immaculate orchestration reminds one heavily of Ezra Winston's Ancient Afternoons and the mix of classical and progressive under a conceptual banner reminds one of Isildurs Bane's Cheval. Other than those small comparisons, all we have here is a totally incredible album, with every second contributing to the overall feel from the ominous undertones of "Le Conseil des Démons" to the absolutely gorgeous vocals of Geraldine Le Cocq on "Morgane" to the dramatic ending of "Forêt," this album is a sheer mark of brilliance and easily the best Musea new release since Shub Niggurath's LP debut. This is by far the best album I have heard in this vein in a long time, and to make what could have been a trite conception into such a magnificent vision is only a mark of the brilliance of these musicians. See you at Progfest, Halloween — well done!

I didn't have very high expectations for this, after all their first two albums were somewhat short of spectacular, especially with their dreadfully pronounced English vocals. Within one minute of putting it on it was clear to me that Merlin would be the disc that changed my mind about this band. Their basic sound is as it always was: a dark and brooding symphonic rock full of powerful yet somewhat morbid melodies that might work well as the accompaniment for any grisly horror film. This is the one thing that Halloween always did so well. The basic band is now a five-piece with the addition of vocalist Geraldine le Cocq, who complements the vocals of keyboardist Gilles Coppin and violinist Jean-Philippe Brun nicely. Add to that a string quartet (Quatour Matheus) and four piece brass section (Bicnia), as well as other musicians on contrabass and prehistoric flute — all used on various tracks as the need calls. The album story centers around the magician Merlin from the story of King Arthur. Wisely, the band has chosen to utilize French lyrics this time, yet over half of the tracks here are completely instrumental, giving the band room to stretch out and try new ideas, which on this album seem to always work well. With the string quartet employed, they often reach a sound that could almost be described as a symphonic Univers Zero; with the brass section and strings together they achieve the bright and powerful romanticism that many bands seem to be searching for but few ever find. The album flows well from one track to the next, almost seamlessly, and the music overall has a well balanced feel between loud and soft, bright and dark. Halloween has done a commendable job pulling this one off; this is gripping symphonic prog that deserves to be heard.

Halloween are a modern French outfit, who have often been compared to Pulsar. With their third album, Merlin, they live up to that comparison, but the approach here is more assertive and perhaps less romantic than Pulsar. The five-piece of core musicians are tastefully augmented by a small orchestra on several cuts, from the eerie opening timpani on "Conseil des Démons" to the soaring lead guitar line on the climactic "Forêt." The music is largely instrumental, with the occasional lead vocal (in French) but the voices (two male, one female) are light, usually heavily effected, and almost narrative in their style, which goes hand in hand with the music. Halloween are very unique stylistically, with thick keyboard pads and dense chord voicings, all the while mysterious, atmospheric and foreboding, telling their story musically with well-sculpted moods. At times the arrangements lack intensity, and the drummer is often unmotivated (or is it that peculiar French minimalism creeping in again?), but the sound is always contemporary, somewhere between classic 70s symphonic and modern-day neo-prog, without succumbing to any of the dangerous cliches of either. The musicians share some pretty impressive moments: Gilles Coppin lights up some nice synth solos (but keyboard techies will instantly recognize that the Korg WaveStation is the secret to his sound, since he makes no effort to hide it — every tune has two or more out-of-the-box WS patches on it), Philippe Di Faostino proves his real skill is on tuned percussion, and Jean-Francois Delcamp paints an eloquent and subtle picture with the solo classical guitar "Viviane." While not a masterpiece, 'Merlin' is a solid all-around effort, both captivating and entertaining enough to recommend it.

Rull's Royce - Rull's Choice – From listening to the music, you would guess that the leader of the band is the guitarist. Not that there are screaming guitar solos all over the place, but guitar does play a significant role at most...  (2004) » Read more

The Ed Palermo Big Band - Take Your Clothes off When You Dance – Legend has it that Uncle Frank once said, “Never kiss a toad from the short forest after it’s been sleeping in a jar with a rutabaga.” Well, that may or may not be true, but what is...  (2007) » Read more

Free Access - Yu Pretty But Yu Kian Come In – I was initially a bit surprised when I saw that this band was from Cuba, not a country known for its prog rock. I was immediately won over, though, once I heard what they could put down. What Free...  (1997) » Read more

Rapoon - The Fires of the Borderlands – Take a simple repeating ascending pattern of three notes and run it through a dense whirlwind of heavy processing, changing patterns and directions from time to time, and one might get a rough idea of...  (1998) » Read more