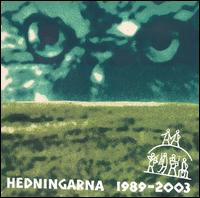 Readers of this magazine have likely noticed over the last few years the fondness that several on the staff have for artists on the NorthSide label, with Hedningarna consistently getting good reviews. Those of you who have taken our advice and picked up on this great band may feel a bit of frustration at this compilation, as it features fifteen of the best tracks from the five proper albums (which you already have, right?) spanning the decade of 1989-1999, plus two new tunes recorded in 2003. The remaining track is a version of “Kruspolska” (originally on 1997’s Hippjokk) remixed by the popular techno artist Sasha. So the question is, are the new tracks worth the cost of this CD? I’m sorry to say I can’t save you any money there – they’re both great, easily up to the level of the other chosen tracks, and featuring a somewhat revised six-member lineup. For those of you who have yet to get into Hedningarna, it’s a no-brainer. Go out and pick this up as a low-cost, low-risk way to see if they suit your fancy. Even for those of us whose roots lie in parts of the world outside Scandinavia, this music touches neurons that feel like the farthest reaches of our past grasping onto the electric vitality of our own time. Primal beats and the raw emotion of ancient instruments weld together with joyful voices and modern technology to produce a communication beyond language.

Barry Schrader - Beyond – One of the many modern American composers whose work is featured by the Innova label, Barry Schrader appears most at home in the electro-acoustic realm. Beyond is his third release on Innova. “First...  (2006) » Read more