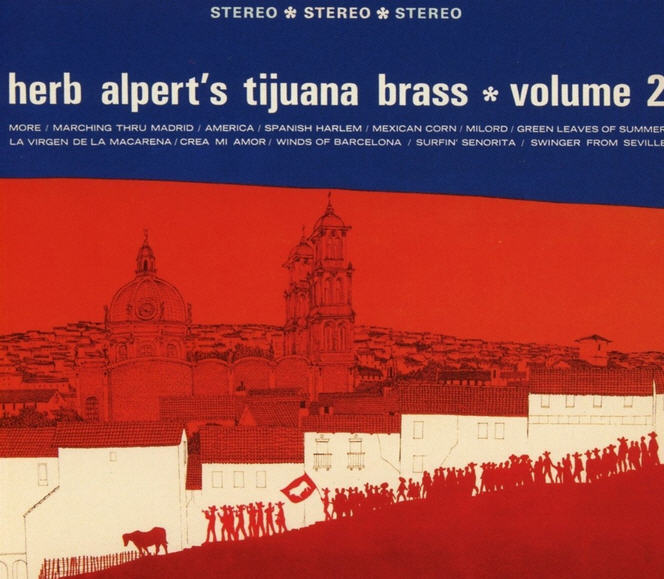 Over a dozen years ago, the Shout Factory label was tasked to release the entire Herb Alpert & The Tijuana Brass catalog on fresh new digipak CDs. Mac Beaulieu even reviewed a good chunk of them back in issue 33. For some reason unbeknownst to me, they never released the second album from 1963, Volume 2. When it was originally released, it flopped, getting nowhere near the attention of the debut album The Lonely Bull with its title track single hitting #6, the two singles released from Volume 2 barely scraped the bottom of the top 100 chart, although when the LP was reissued a few years later, the album fared much better. Perhaps this is why it was ignored for reissue? Anyway, that has been rectified now with this CD reissue, released by Alpert himself (along with the rest of the catalog including other post-1968 albums that Shout Factory ignored). Opening with “The Great Manolete,” an Alpert original which seems to be attempting to re-create the feel of “The Lonely Bull” — not a knock, it’s an excellent opener — the album quickly moves into TJB’s trademark Mexican flavored interpretations of contemporary pop songs with an absolute stunning version of the Lieber / Spector hit “Spanish Harlem,” which still sounds great to this day (the song, at only three minutes, features some vocals as well, a rare thing for Tijuana Brass endeavors at this early stage). Other instantly recognizable tunes include the Bernstein / Sondheim theme “America” from the West Side Story soundtrack, and “More,” the theme from the movie Mondo Cane. Other originals with seemingly silly titles like “Surfin’ Señorita” and the striptease-like “Swinger from Seville” contain absolutely infectious melodies that will follow you around all day. The album’s highest charting single (at #96!) is “Marching thru Madrid,” written by Sol Lake, with a warm and beautiful melody that repeats and fades away gracefully at the end. Lake, who penned “The Lonely Bull” on the first album, wrote two other tunes here as well, “Crea Mi Amor” and “Winds of Barcelona.” I’m pleased that better judgement has prevailed and Volume 2 has finally made it to compact disc.