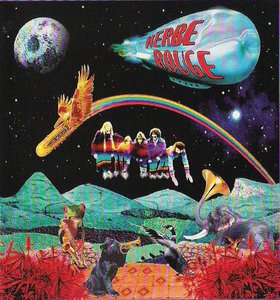 This progressive group is of the sort that could only come from France in the 70s where a distinctive and idiosyncratic form of weirdness flourished. Like many of their progressive compatriots, Herbe Rouge purveyed a type of music characterized by angular and piquant melodies, and unusual chord progressions tinged with dissonance, but more importantly, unexpected turns and unlikely, but convincing goals. There are some other characteristic features, however, which set them apart from the pack. The group had a four-man horn section featuring saxes, clarinets, trumpet, and trombone. And while the horn arrangements are informed by jazz, it is a kind of contemporary big band style that does not rely on nostalgia or swing. One might suggest the likes of Zappa, Carla Bley or even the Willem Breuker Kollektif, but these only hint at what Herbe Rouge does with the horns. From time to time there are bits of French cabaret or music hall style, giving the music a humorous twist. Overall, the instrumentation is quite brilliant, including various bells, chimes, glockenspiels, marimbas, ocarinas, finger cymbals, and other colorful, if not unique touches. Even the occasional vocals are distinctive, ranging from spoken narratives to Captain Beefheart-like growls to Zappoid falsetto which contribute to the humorous effect, but also provide the music with elements of theater and drama. Legend Music has even managed to dig up a few bonus tracks, demos and jams. If you like your prog to be truly progressive, challenging, experimental and off the beaten track, you owe it to yourself to check out Herbe Rouge.