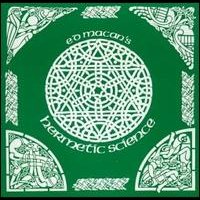 If Macan's name sounds familiar, perhaps it's because you've seen or read his book Rocking the Classics (Reviewed in Issue #12). Macan's three-piece band Hermetic Science features bass, drums, piano, and a variety of mallet and tuned percussion instruments (vibes, marimba, tubular bells, glockenspiel, tympani). The album features two different lineups of the band, one dating from '96 and another from '97, both comprised of students at College of the Redwoods near Eureka, California, where Macan is a music professor. With only tuned percussion driving the melodic end of the sound, one might imagine that the music here is not your standard fare; the drums and bass fill the bottom end nicely, presenting a busy framework over which the complex melodic structures are developed. What's missing here is a sonic 'middle ground' to fill in the midrange spectrum — the result being a very light and airy feel that hints as much of Gary Burton's early ECM albums as it does of some of the European chamber rock ensembles like Art Zoyd. The chief difference here is that the compositions here are rock based — never mind the lack of guitars, though more variety in the instrumental approach might have made this better. More than occasionally one might be reminded of the early work of the Quebecois band Maneige, minus all the symphonic elements. Of the eight tunes presented here, five are originals penned by Macan. They also cover Curved Air's "Cheetah," an obscure ELP tune, and the the disc closes with an excellent seven minute adaptation of Holst's "Mars," from The Planets. In all, this is a highly original and promising debut that fans of mallet percussion surely won't want to miss. Recommended.