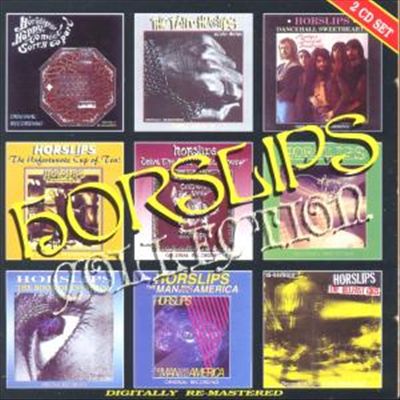 Finally a representative collection of the work of this excellent Irish folk-rock band that doesn't focus exclusively on their hits. This 2CD collection - both discs full length, traces the band's roots from their earliest days. The band, a five-piece of guitars, keyboards+flute+pipes, fiddle+mandolin+concertina, bass, and drums+bodhran, with three members sharing vocals, would remain unchanged from their first album in 1972 through their final tour in '80. The earliest material featured here ("The High Reel," "Green Gravel," and "Johnny's Wedding") actually pre-dates the first album, and features slightly different lineups. These tracks, as well as those culled from the first album, show a more acoustically driven band with its heart deep into traditional Irish folk song. This propensity for folk themes would underpin all of the band's compositions up until their last studio album. Horslips turned on the electricity for their second album The Tain - quite possibly the best of their early ones, and one that would start endless press comparisons with Jethro Tull. Six tracks from that album are represented here, including the powerful rocker "Dearg Doom." The remainder of the first disk of this set is devoted to material from their third and fourth major label albums - not the best period, but nonetheless there are some gems from those two, including a rocking version of the traditional tune "King of the Faeries."

The second disc begins with six classic tracks from their seventh, and most progressive album, The Book of Invasions, including most of the first side (although I would have preferred that the intro and outro to "Sword of Light" been left intact). Two tracks are taken from their all-acoustic Christmas album Drive the Cold Winter Away. Two more studio albums, Aliens from '77 and The Man Who Built America from '78 would form a trilogy with Book of Invasions, each moving further in a rock direction and losing more of the overt folkiness of the early albums, yet their compositions were still built on a solid foundation of Irish traditional music. Several great tunes from this period are included: "Tonight," "Sure the Boy Was Green," "Speed the Plough," and "Loneliness" are among their most memorable songs. Also included is a short track, "Bridge from Here to Your Heart," that was only previously available on a hopelessly obscure EP from the same period. By the time of Horslips' final studio effort Short Stories, Tall Tales in '79, their sound had been completely stripped down to basic rock. O'Connor hardly touches the fiddle or mandolin, instead opting for a two-guitar formula devoid of the trad underpinnings that made all their previous work so special. It's no surprise, then, that only two songs from that album appear here: "Guests of the Nation" - because it was a massive hit, and the gentle acoustic "Rescue Me," with its beautiful multi-part harmonies - because it truly deserves a place among their best work. For anyone unfamiliar with the volume of work by this great band, Collection is definitely a good place to start. For those who may have Tain and Book of Invasions and don't know where to go next, this 2CD set highlights much of the best work from all those other albums.

Phoenix - Renascent Phenomenon (Archives 4: 1970-1971) – Supposedly this album of songs was written back in the early 70s for the original version of Dutch group Phoenix, which included Jos Hustings who, along with partner in crime Mathilda Roza, is...  (2005) » Read more