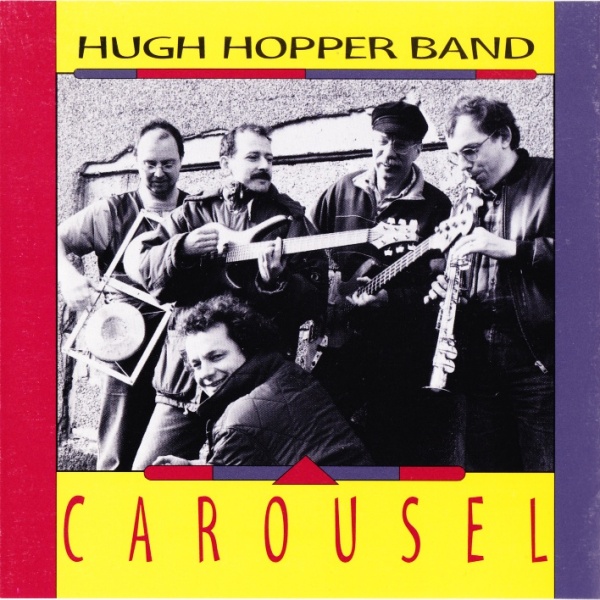 Former Soft Machine bassist Hopper has pretty much kept a low profile throughout most of the 80s, so it's good to see him active again. His latest project is a band bearing his name, recorded in the Netherlands with Dutch musicians. Though not really a solo album, Carousel nonetheless finds him back on form. Though bearing Hopper's name, Carousel is very much a group album. Hopper composed only half of the album's ten tracks, and two others are group compositions. And while Hopper's bass does get some solo space, the instrumentation is pretty well balanced, with guitar and sax acting as fundamental sonic components. Stylistically the slant is steeply towards jazz, rock appearing evidently as an afterthought, centered principally in Hopper's fuzz-toned bass. The pieces range from tight latter-day fusion, to unrestrained free-form jazz, to at times an almost big-band sound (on the two tracks with trombonist Robert Jarvis). Hopper even pulls a piece from the archives, namely the old Isotope track "Sliding Dogs." Musically, the band still sounds a bit disjointed, but with work I feel that will improve. While not an unqualified success, it's good enough to expect exciting things from Hopper and company in the future. Keep an eye out.

For the past decade bassist Hugh Hopper has played bandleader to a number of different lineups, all of which have been oriented primarily towards live gigs. Carousel finds him back in the studio with the latest incarnation of his band in an attempt to capture the energy and creativity of the group's live performances in a studio quality recording. It's obvious that this ensemble has played extensively together; there is a strong sense of unity and balance in their sound. The music is nominally in the fusion realm, but these tunes are much more varied and eclectic than that term usually implies, ranging from light playful pieces to free form improvisational mayhem. The band works marvelously well together; Hopper's versatile bass along with some solid and tasteful drumming provide a firm anchor for the melodic and improvisational explorations of the others. Saxophonist Frank Van Der Kooy gets perhaps the biggest share of the spotlight, contributing some strong tenor and soprano solos as well as a few unison lines with Hopper's fuzz bass, which briefly recall Hopper's Soft Machine days of old. Guitar and keyboards round out the sound. Overall, Carousel does an excellent job of showing off this ensemble's diverse sound and interactive prowess. Though two of the seven studio tracks were completely improvised, the cohesiveness of those performances would make the average listener think otherwise. Three live tunes from a 1993 gig are included here as well, perhaps as an incentive for impressed listeners to seek out the various live albums recorded by Hopper's group over the years. For anyone into improvisational and fusion style music, this is some solid and creative material.

Carl Weingarten - The Acoustic Shadow – For fifteen years or so, guitarist Carl Weingarten has been active, releasing several albums under his own name, and collaborating on several more with the likes of Joe Venegoni, Kit Watkins, Walter...  (1995) » Read more

Dogma - Twin Sunrise – This brand new album by Brazilian band Dogma showcases a wider instrumentation in which Fernando Campos' acoustic guitar brings on many delicate moments, alongside compositions that are making...  (1995) » Read more

Adrian Belew - Coming Attractions – Adrian Belew has been very busy in the imposed break from King Crimson. With multiple projects in various stages, it makes sense to market a sampler to highlight each of his works. Obviously,...  (2000) » Read more