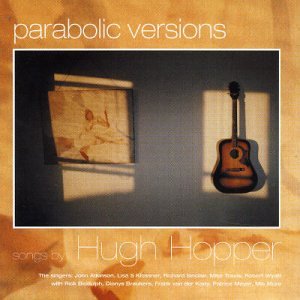 Hugh Hopper is at that point in his career where he wants to clarify direction. He's been through a well-documented improvisational phase with Soft Machine and its offshoots. Presently he's come full circle in focusing on the marriage of lyric and vocal to his songs and shrouded arrangements. Parabolic Versions is as a selected re-visitation of songs Hugh broke new ground with when working with a set of five vocalists. They range from longtime friends and collaborators (Robert Wyatt and Richard Sinclair) to newer musical acquaintances (John Atkinson, Lisa S. Klossner, and Mike Travis). Atkinson reminds me of Can's Malcolm Mooney at times (as on "Oldest Story Ever Told" and "C'est Grace") while Klossner's delivery is not as easy to peg. The three tracks she appears on are outtakes from previous sessions Hugh had done with her for their first collaborative album together, but for some reason didn't make the cut. Of these, "Kate Come Late" features two guitarists and Hugh's Cubase software backing. "When I've Grown Old" is probably one of the more somber tracks he's ever recorded resembling classic Henry Cow and featuring counterpoint bass clarinet from Frank van der Kooy. Sinclair appears on the most bass heavy track from the acclaimed Somewhere in France disc (reviewed in #13). Wyatt appears in what I'd classify as the basic demo for the piece, which would be one of the best from his 1998 release Shleep and is wonderful in this low-fi format. Overall, his sampling of recent works is one that serves as a fine introduction and also gives a home for miscellaneous pieces that didn't fit into the albums they were targeted for.