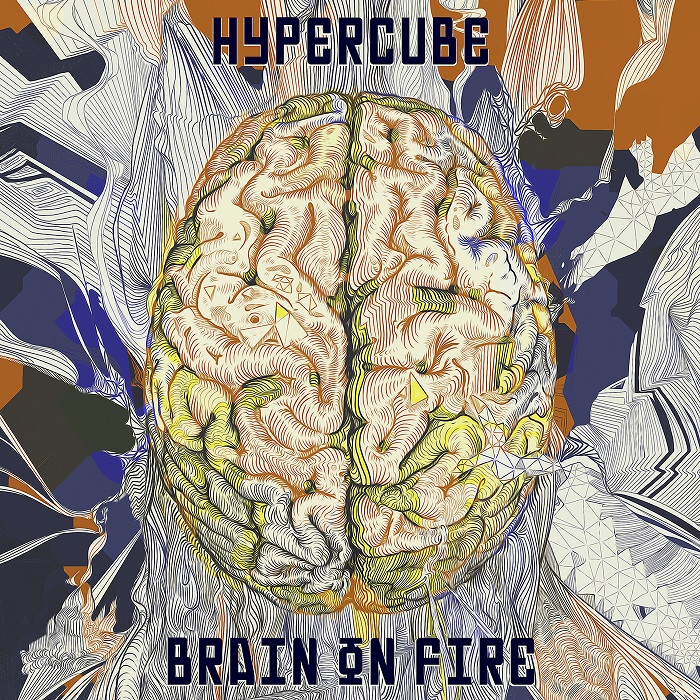 First, before anything is said about the release at hand, let’s clear up what Hypercube is. If you go searching on Bandcamp you’re likely to run across Hypercube, a London computer-based musician named Rodrigo Passannanti, with over two dozen releases to his credit, but that is not this Hypercube. For the purposes of this review, Hypercube is a New York City quartet working the extreme boundaries of chamber music, opting for cutting-edge experimental works for sax, guitar, piano, and percussion. Interestingly, four of the five pieces on this, their debut release Brain on Fire, are commisioned pieces by composers outside the group, only the fifth and final piece “Casino” was written by saxophonist Erin Rogers, the remaining members being Andrea Lodge (piano and accordion), Jay Sorce (guitars), and Chris Graham (percussion), and of course electronic sounds figure into their palette as well. By this time one may be wondering what this all sounds like. The opening thirteen-minute piece “Under Nails” composed by Dennis Sullivan is an exemplary introduction, a sound that seems to wander freely through the wilds, bursts of percussion punctuating random piano sounds and sax elaborations, fading to black occasionally, sounding almost like a free improvisation at times, but overall the process is too precise to be anything but scored. There’s even a little harmonized vocal bit “...hold on to your” followed by an outburst of distorted electric guitar that happens at roughly seven minutes in, and then again a couple minutes later, amid seemingly random percussive noodling. “American Tokyo Daydream IV” by composer Sam Pluta takes a more angular approach with higher density melodic sounds, though still many edgy jagged corners still abound. Other compositions include Philip Schuessler's "Liminal Bridges" and Nicholas Deyoe's "They Solidify Then Tilt," each with its own unique character, executed precisely by the ensemble. This collection of avant garde compositions is probably best experienced first hand to be understood, and fortunately Hypercube’s Bandcamp site (link included below) makes that entirely possible.