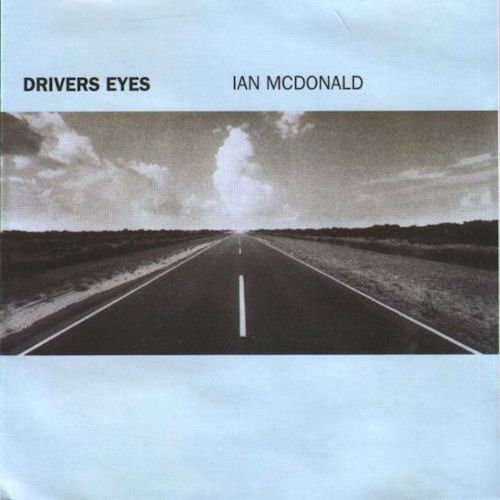 Let us take a long journey back through the ether to advent of progressive rock. Who do you see lurking around in the shadows? Well one person was Ian McDonald whose group, King Crimson, was a magic band by definition: forceful and radical approach. McDonald's role was as contributor, but vague in most aspects related to the actual creation of the concept of that influential quartet. Now thirty years later, we have his first solo album with a myriad of alumni on Steve Hackett's Camino label. Save for 1970's McDonald and Giles album and his three year stint with Foreigner, the gifted multi-instrumentalist's writing and arranging work has been largely undocumented until now. It appears that his recent involvement with Hackett's Tokyo Tapes and Crimson's Epitaph projects has kicked some life into those savvy bones. Most of Drivers Eyes is upfront rock with overtones of the checkered past. John Waite croons "You Are Part of Me" with a solid rhythm held down by the drumming of none other than Michael Giles. Several other singers give competent vocal readings including Lou Gramm (Foreigner), John Wetton (Crimson, UK, Asia), and Gary Brooker (Procol Harum) on the album's closing track. Other notable contributions come from Hackett, lead guitar on "Straight Back to You," Peter Frampton on "If I Was" and former Hall and Oates sideman G.E. Smith on "Saturday Night in Tokyo." The instrumental tracks, "Sax Fifth Avenue," "Hawaii," and "Demimonde," feature good melodic content across basic arrangements and 4/4 tempos. Overall, this successful MOR album should find a home with classic rock stations that have been playing "Feels Like the First Time" in their 70s time warp. And what’s wrong with that really?