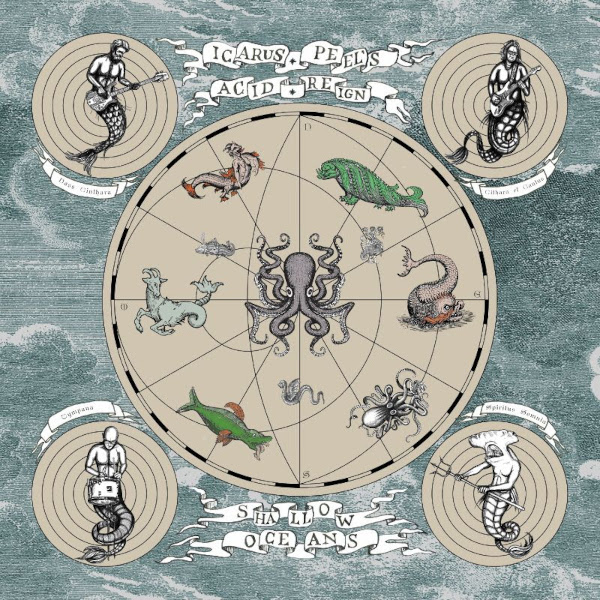 Shallow Oceans is an album I have been looking forward to hearing and reviewing. The Honey Pot’s Icarus Peel formed a power trio about two years ago to explore and extend his love of 60s and 70s psychedelia. Shallow Oceans is their second outing, and an excellent one at that. A strong Hendrix influence runs through out the disc, alongside Cream, The Groundhogs, and Taste (Rory Gallagher). The power trio format is more than just an avenue for Icarus Peel to show off his guitar chops. The trio performs memorable and lysergic songs with catchy riffs. “Half Space” opens the album with pretty powerful head music and driving rhythms. The title track hints at Jimi Hendrix’ “Third Stone from the Sun” and “1983...(A Merman I Should Turn to Be).” The song is familiar, yet new. The third track “We Come in Peace” is not so much of as a song, but more of a martial psych jam with blistering guitar, sounding like a blend of Test Dept. and heavy psych. “Divided” is a cool aggressive 70s hard rocking foot stomper. “Dancing on the Moon” is another acid laced psych homage to Jimi Hendrix. Then we have “Symphony of Groove” with all three musicians grooving separately with their riffs weaving in and out, plus some shades of Daevid Allen. “Wishful Thinknig” takes a slightly different tack towards an acid folk/Joy Division riff along the lines of “Love Will Tear Us Apart.” And the album closes with “Snakes,” an acid folk tune about a crazed mind. So, if you yearn for extended guitar-driven acid rock, look no further. Shallow Oceans is for you.

Enya - Amarantine – In reality the name Enya is almost a group moniker encompassing the Irish singer/musician as well as her collaborators, producer Nicky Ryan and his wife lyricist Roma Ryan. This collection echoes...  (2006) » Read more