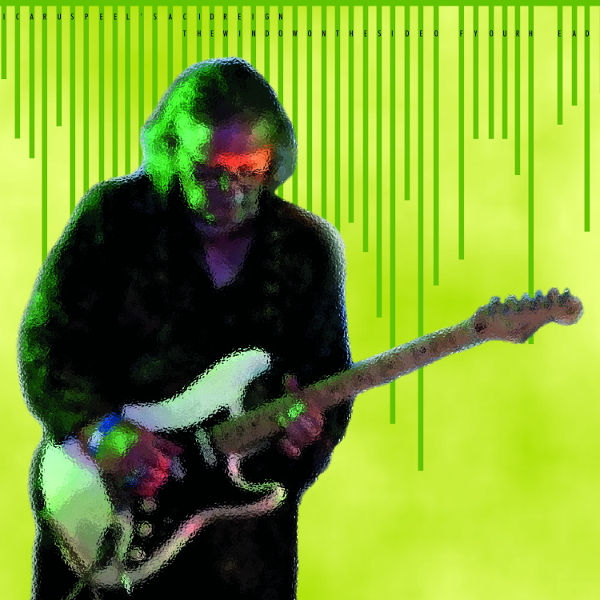 Icarus Peel steps out in front with his power trio Acid Reign to release some brilliant extended guitar-driven acid rock, a departure from what we have grown used to with The Honey Pot and Crystal Jacqueline. On July 27, 2018 his new album The Window on the Side of Your Head hits the street, and it is a killer! Definitely a candidate for one of the top ten 2018 releases. The eleven original tunes allow Icarus to show off his guitar chops. The opening instrumental track, “Eel Plurr,” is a title worthy of The Bevis Frond plus distorted guitar feedback with shredding that honors Jimi Hendrix. “Somewhere Far from Anywhere” is a wonderful acid rock song with a George Harrison Indian vibe. The next, “Midnight Moonlight,” is a fun acid rock road trip song that contains the album title in the lyrics along with some inspired guitar riffing. The fourth song is “Marley’s Chains,” which makes you wonder, is Icarus referring to Jacob or Bob? After a couple of minutes of funky beats and trippy psych that morphs into a “Foxy Lady” beat, Icarus sings “every sin is a link in your chain,” which removes any doubt. “Gazing Up at Jimi” is an obvious reference with a slow and steady beat, reverbed wah wah guitar, and a unison vocal and guitar melody. “Be Calm, Becalmed” is another trippy song with an extended Hendrix-inspired guitar solo. Then there is the instrumental, “Let’s Get It Together,” a wonderful raga rock tune with pseudo-sitar, tamboura, and tabla that is all too short for my tastes. Then Icarus changes it up with the ZZ Top-inspired “Way out West” followed by another trippy acid blues tune “Eyes of Insomnia” that also features some gritty organ riffs. “Falling All Around” reminds me of Be Bop Deluxe. And the album ends with “The Sun Will Leave You Cold,” a trippy sci-fi tune with liquid vocals, extended acid jamming, and influenced by Hendrix’s “3rd Stone from the Sun.” What more can I say? This is one great album!

Moby Trip - NKU – Moby Trip is a trio from New Zealand operating in the retro-psych realm. The band features guitars, bass, and drums, with the guitarist doubling on keyboard programming, and vocal duties shared by...  (1999) » Read more