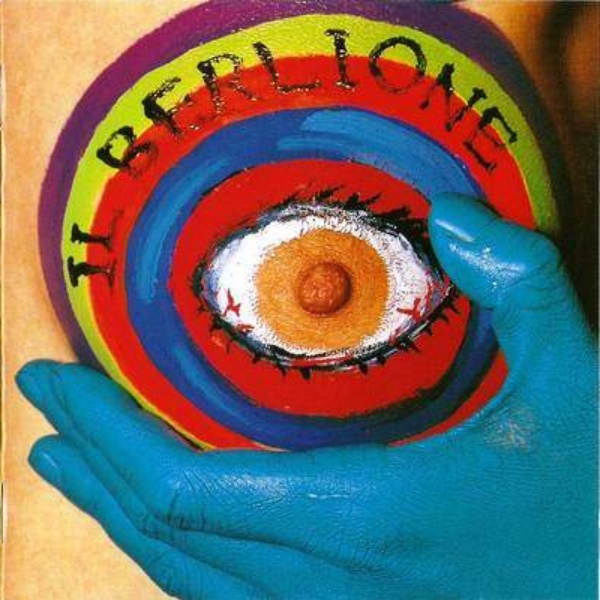 One of the things I dislike about the CD revolution is the fact that many artists feel obliged to fill out at least 65 minutes of music on it, when it's obvious they don't have that many ideas. I find that the new Il Berlione suffers from this – I would have been more impressed if 20 minutes would have been trimmed off as 45-50 minutes is often more than enough. Obviously with a band this talented, there's going to be a lot of great music here – there are some really good tracks but they tend to be mixed in with a lot of filler – pointless noodling and average run of the mill melodies. One thing I do like about CDs is you can edit at will. Cooking is quite a different change from their great debut. Il Berlione's new concoction seems to be a lot more accessible (don't read this as commercial though) than before. Parts of this are almost pure jazz and little of the whole is overtly experimental. Much of this is whimsical fusion with a sax lead similar to Miriodor at times and at their most extreme resembling contemporary Tipographica. There are many odd tracks out though such as the long "Giant Image of Buddha" with its extremely repetitive Crimson like riff and lots of sax soloing. The album gives me a different impression each time, depending on which tracks I end up paying attention to. I like it sometimes and am bored at others, but overall it's definitely worth checking out.

This new release by Il Berlione is a mosaic feast to the ears. The soundscape is quite colorful, ranging from piano and drum solos to electric and acoustic guitar duets, the works. Not all of it would classify as progressive music though, as many passages lean towards jazz rock. Many of the pieces offered here have a riff or short line as leitmotif to venture from and come back to. From the more or less zen-like introduction to the heavy, relentless, distorted Crimsonian guitar ostinato over which a mad saxophone blurs its urban plea, this second offering by the Japanese formation is one that'll be re-discovered at each listen for quite some time. By comparison to their previous disc, this one's got more groove, more down-to-earth rhythms, while also keeping a lot of that quirkiness of some themes we got to know and love from their previous disc. More sax on this one, as solo and as duets. More space given to the expression of feelings. Finely crafted by talented musicians, rendered with precise minutiae, this colorful collage although excellent as it is, may appeal more to adventurous listeners. In fact, Il Berlione can't really be categorized in one sentence (though a highly imaginative one could perhaps hint at), and this is what makes their strength. An extreme reflection of the diversity in progrock and fusion but also a reflection of the diversity of an urban landscape. This is a musically colorful disc located under the shadow of playfulness and expert musicianship. Il Berlione is a band that I'd go see performing live at any time and I hope they'll be playing in North America one day soon. Please invite them to your local jazz/prog fest!

This Japanese quintet has widened their scope a bit for this, their second regular release, bringing in some ethnic, folk, and jazz elements to share the already crowded space with their fast and furious brand of jagged-edged rock. There is still plenty of influence from the Canterbury / RIO scene, but Il Berlione do seem to be well on the road to developing a sound that is more uniquely their own. It's that passage that may cause some to fret, who may have been hoping that this band would be turning into another Henry Cow. What they do, they do well... like what other band could start a song using exclusively traditional Japanese acoustic instruments and slowly twist it into something that sounds like something from Red era Crimson – precisely what they do on the eleven minute "Giant Image of Buddha," a track that gets off to a solid start but seems to overstay its welcome with extended gratuitous soloing by saxes and guitars. Yet that's not the case with all of the album's fifteen tracks, although I've got to say that 70 minutes of this type of music is almost more than one can take in a single sitting. Try "Brilliant Beauty with No Scanties" on for size, where they explore a more relaxed and smooth jazz mode, or the layered acoustic / electric slide guitar solo piece "Agoo," or even the downright funky "Tamagawa Shuffle" – three of several tracks where they are making a conscious effort to reach out and cover some new ground. Obviously a band progressing. Recommended!

Il Berlione's eponymous debut was a sleeper-classic of 1992. Combining fusion, heavy rock, and avant/experimental music, they've forged their own path as unclassifiable instrumentalists. Consisting of five equal parts (guitar, bass, sax, drums, keys) their second album moves in some new directions, as well as covering established ground. Overall, this release has a looser, jazzier feel on certain tracks, combined with a frantic sense of urgency on others. Clocking in at nearly 70 minutes (15 tracks), the tight composition displayed on their debut is downplayed. This has given the band room to explore more soloing, as well as solo tracks. Several tracks serve as solo showcases, for drums, guitar and keyboards, respectively. These pieces could be called noodling, and certainly don't add much to the album. However, the impressive drum-work of Hiroo Takano is always a pleasure to listen to. The abrupt context shifting that pervaded the first track of their debut is prominent on some of the pieces of this release as well; most notably in the opening title cut. The shift from world-beat rhythms to punk riffing to jazz-saxophone wailing seems a bit contrived (like they are trying to confuse us for the sake of confusing us), but on the surface level it seems to work (even when it is repeated backwards at the end of the album). Some of the more stand-out pieces are the 10 minute "Giant Image of Buddha," which features excellent drumming and soloing over a simple and repetitive power-chord riff (though the riff does grow tiresome), "At the Foot of the Polyethylene Tree," which is only track that would seem at home on their debut. "Human Head Soup" and "One Infernal Fact in Paradise" are both eclectic pieces of quirky fusion. If anything, 453minutes suffers from sounding rather thrown-together. There are several mediocre tracks, in particular, the very straight-up "Nao-chan's Rustling" and "Koenji Sake Bar," as well as "Tamagawa Shuffle," which could be seen as Il Berlione's take on sappy, easy-listening jazz. Without these dead-weight tracks and the solo cuts, this would have been a solid 45-50 minute release. As it stands, this album is diverse, yet very inconsistent compositionally.

Il Berlione is an extremely talented band, and I find it difficult to admit that I am disappointed with this release (but admit it I will). While it moves in new directions for the band, they are covering some all-too-well-covered ground (especially with the simpler jazz pieces). Nonetheless, 453minutes has some sections that really smoke. They certainly are more interesting musically when they are producing quirky avant-jazz. With a higher level of complexity and innovation, this would have been another winner; as it stands, it looks like Il Berlione has become another victim of the sophmore slump.

There is little I can add to the other reviews regarding Il Berlione's follow-up album, In 453 Minutes Infernal Cooking. Il Berlione"s second comes across as more jazzy and zany to my ears. They seem to be stuck in a sort of avant-fusion mold this time around, less concerned with just staking out their own brave path as on the first. I have to agree with the statement often made about the CD format encouraging bands to fill up as much sonic space as possible. However I can't blame someone for trying to give people a little extra for their money. Clearly this is a peril of the CD medium that will always be there as long as the darn things are so expensive. Anyway you can't fault the phenomenal playing on this! Tappi Iwase's drumming is particularly mind-bending; the guy practically leads the whole band from behind the drum kit. Tighter, more impressive arrangements you will not find. And besides, just about anything would seem less than satisfying up against that first release.

Goblin - Roller – Nice to see this one reissued again, as it was only available many years ago as a very limited edition in Japan. Goblin were a group of musicians who did many horror soundtracks, the best of which,...  (1996) » Read more

Väsen - Trio – I’ll admit that one of the things I normally like most about Väsen is the unconventional use of percussion, so the prospect of a Väsen album without a percussionist was not at first...  (2004) » Read more

Blind Owl - Debut at Dusk – The story behind this is that in 1987, the cassette, LP, and CD were all supposed to receive a simultaneous release. Apparently somebody dropped the ball – the LP was released, but the CD fell...  (1995) » Read more

Jadis - Photoplay – Gary Chandler has consistently led the banner for Jadis for the past ten years, making the group a solid player in the melodic rock, neo-prog camp. The current line-up has been pretty consistent with...  (2007) » Read more

Scott McGill's Hand Farm - Ripe – This is the second release from McGill that features a blistering instrumental fusion trio. There are several improvements over 1997’s excellent debut disc, Hand Farm, and they include better...  (1999) » Read more