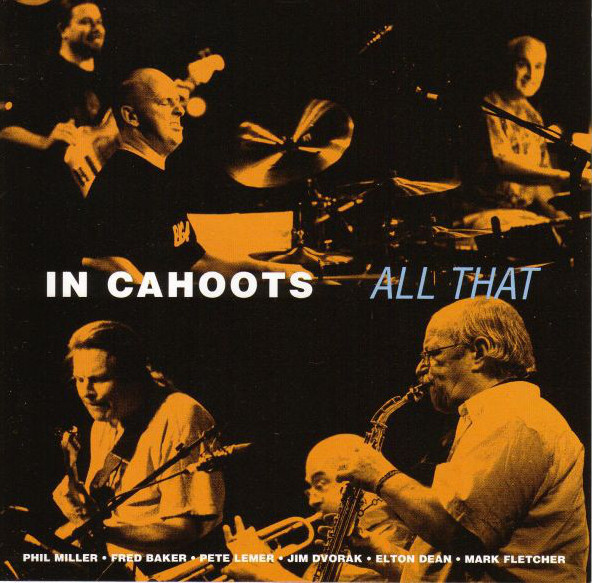 Guitarist and composer Phil Miller has taken full advantage of a rejuvenated outlook as a result of his band’s acclaimed first West Coast appearance. With the addition of new drummer Mark Fletcher along with a veteran brass section including Elton Dean and trumpeter Jim Dvorak, the group stole the festival from Software (with Allan Holdsworth) at Progman 2002 in Seattle. Miller, being an astute planner, took the band into the studio in January this year to record a set of six new pieces and a reworking of an older piece in his arsenal (“Your Root 2”). Keyboardist Peter Lemer’s “Big Dick” (a tribute to Dick Heckstall-Smith) was written by Lemer while waiting for a gig and utilizes a shell framework where the other players work inside the construct. Miller’s “Inca” is a mid-tempo track that begins with Miller and Dvorak carrying a unison lead before Miller takes the first solo on the track. Perhaps the guitarist’s best composition is “Sleight of Hand,” that features a light introduction capturing the old National Health feel with Dean’s and Dvorak’s best solos. As Dean himself confirmed in a brief interview this fall, Miller’s songs are an excellent format for these players as his songwriting skills appeal to the best instincts of experienced players. Overall this is the best group album since the Live 86-89 In Cahoots disc. Highly Recommended, and on my top ten releases for this year.

The brilliant and fluid jazz, rock, and improvisational sensibilities of this outstanding lineup (now featuring new drummer Mark Fletcher, who played with them at Progman Cometh 2002, replacing Pip Pyle) all come together to make this one of In Cahoots’ finest moments, equaling or topping the great live sets from the late 80s and early 90s. I guess the keyword here is energy – there’s a lot of it on a many different levels, on each of the seven tracks here. I guess it doesn’t hurt to have some of the best players around in your band (Elton Dean, Fred Baker, Pete Lemer, and Jim Dvorak – on sax, bass, electric piano, and trumpet respectively), but much of the magic here can be attributed directly to guitarist and bandleader Phil Miller, and his exceptional skills as chief composer and arranger, who tends to tailor the material to bring out the absolute best in each player. The dynamic interplay between soloists, guitar and keys, and the incredibly nimble rhythm section is at times mind-boggling, plus the great sense of melodicism in the compositions makes this set a thoroughly satisfying experience. The arrangements are such that every listen reveals some new structural or melodic paradigm that wasn’t evident before; it truly is one of those discs that can sustain endless replays and keep delivering the magic. All that makes All That easily one of the year’s best releases.

It seems hard to believe that it’s been over 20 years since Phil Miller formed In Cahoots after the late great National Health disbanded. All That is only the sixth full In Cahoots album, although Miller’s solo albums Cutting Both Ways and Split Seconds both contained several tracks by the band. In many respects, All That continues in the tradition of the prior albums as it offers up Miller’s jazz-inflected compositions with intricate themes and lengthy solos by the band members. The players have impressive pedigrees including stints with Soft Machine, Matching Mole, Gilgamesh, Keith Tippett, and much more. The band’s sound has been altered somewhat with the addition of drummer Mark Fletcher, who replaces Pip Pyle now that he has formed his own band, Bash. Despite Fletcher’s jazz background he brings a powerful rock underpinning to the rhythm section that compliments monster bassist Fred Baker’s melodic chops perfectly. Since the melodies are often stated in unison by the sax and trumpet, the album will sound to many listeners as coming mostly from the jazz idiom. While the music is extremely well written and played, those seeking more of a progressive rock sound could be somewhat disappointed. Having said that, the album is truly outstanding, and its complexity can be best appreciated after multiple listenings. The only suggestion for the next album is to have some tracks recorded as a quartet with the horns sitting out in order to be able to hear Miller’s intense playing in a less dense context.

The Mother Hips - Kiss the Crystal Flake – The Mother Hips have been kicking around the Bay Area for at least a decade, having a half-dozen or so releases to date, though this is their first in a few years. Their stock in trade is great...  (2008) » Read more

Various Artists - Supper's Ready – Yet another tribute to the late, once great Genesis, this time by the crew at Magna Carta records. This single CD is an excellent production, though the choice of material often leaves something to be...  (1996) » Read more

Neil Haverstick - Other Worlds – Back in #18, I reviewed Neil’s last album, Acoustic Stick, a masterful jazz / blues / folk acoustic release utilizing customized guitars and basses with 19 or 34 frets to the octave (rather than the...  (2000) » Read more

Mahavishnu Orchestra - The Lost Trident Sessions – Out of the vaults come recordings for an aborted third album by the original line-up of the Mahavishnu Orchestra. Time to celebrate! This was the band who set out to chisel a trail across jazz and...  (2000) » Read more