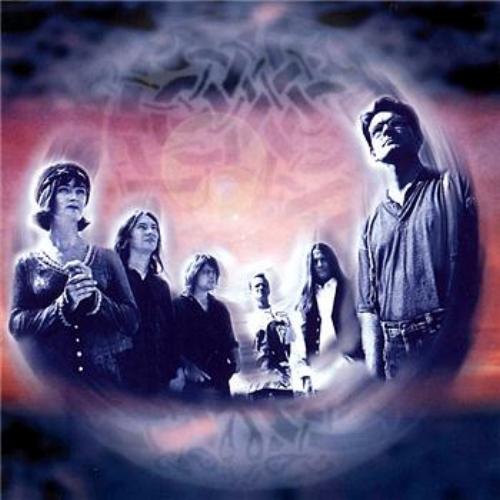 Released quietly at the end of last year, this seems to be the album that will earn Iona the recognition and following they have long deserved. This is clearly their strongest effort yet, touching all the bases from their previous releases, but with more surefooted self-confidence and dynamic strength. Led by the powerful voice of Joanne Hogg, and powered by a five-piece band playing numerous instruments plus guests, the uninitiated should know that Iona play what might be called Celtic Rock, similar in texture to Clannad, but with an adventurous edge. Similarities could also be drawn with Sandy Denny period Fairport, and even Heart in their better, more introspective moments, yet the whole intensity level is ratcheted up several notches here. The album begins with a short Gaelic tune, followed by three relatively accessible tracks. After "Everything Changes," the album quickly ascends into prog territory: longer, involved excursions with non-traditional structures, and traditional folk instrumentation: the tin whistles, Uillean pipes, violin, and hand drums integrated seamlessly into the sound of the rock ensemble. Blazing rock power surges punctuate the more gentle ethereal vocal passages on "Encircling" and "Inside My Heart," with fortified melodics carrying the moment on "Lindisfarne." They back down a bit with the more pop-styled "No Heart Beats," but quickly turn it around again for the remainder, with the instrumental "Heaven's Bright Sun" being perhaps the album's high point. Fripp adds his frippertronic touch as guest on a couple tracks. Overall, this is uplifting, powerful music that engages the soul. My highest recommendation.

While this is for the most part an unabashedly pop-styled album, it also happens to be a solid, captivating, and thoroughly enjoyable listen. Similar to Clannad at times, Iona's music is a lush and energetic Celtic pop, with strong nods to both traditional Irish sounds as well as various contemporary pop styles. Carried by Joanne Hogg's enchanting voice, the songs have that air of majesty and melancholy that is uniquely Irish. The melodies are catchy and original and the instrumental accompaniment sophisticated, with some excellent acoustic guitar work and traditional tin whistles and Uilleann pipes mingling skillfully with the standard pop sounds. But the high points by far are the numerous finely executed instrumental features with powerful symphonic textures maneuvering through some surprise turns and supporting fluid leads and aggressive guitar solos from Dave Bainbridge. Also notable are guest appearances by Robert Fripp and Clannad's Maire Brennan. Though nominally a pop album, Journey into the Morn is a truly excellent recording by any standard and possesses an impressive amount of musical wealth and progressive ideas, all wrapped up within the grandious Celtic spirit. Strongly recommended, if you're not afraid of good pop music.

The first 15 minutes of this album (except the two-minute opener) give the listener no idea of what is to come. If you judge an album based on a cursory listen of the first few songs , this one would certainly have thrown you for a loop. By track 4, "Everything Changes," I was wondering what the hell I was even reviewing this for as the practically soul/pop drumbeat was way too radio friendly for these ears. After the Clannad (well, Maire Brennan makes an appearance)/Kate Bush/Fleetwood Mac styled pop songs at the beginning I was fairly disillusioned. But bam just as I thought the cause was lost up comes "Inside My Heart" and a completely tremendous guitar solo. I was floored by this point and as it faded out and the 12-minute epic "Encircling" started up with a Celtic drone feel I was totally bewildered. What's going on? This album gets so good by this point with deep rich synths and a spacey feel that is so spiritually connected that you almost get used to the goosebumps. This is what "neo-progressive" should sound like in my opinion. It's rich, melodic, diverse, and not purposefully melancholy. By the time you get to "The Search" and "Divine Presence," Mr. Fripp has climbed aboard with his guitar synths and the deep spacey atmospherics take the album to a nearly ambient level. There’s even more here — reel like tracks and songs with a more accessible style that work as a vehicle for Joanne Hogg's beautiful voice. Even if you program out some of the more poppier tracks there is still a solid albums worth of fantastic music here. Iona are a rare breed, I can't help but recommend this highly, especially to those inclined to modern productions.

Scarlet Thread - Psykedeelisiä Joutsenlauluja – I know virtually nothing about Scarlet Thread other than the fact that they are Finnish and appear on the Kalevala epic collection. In spite of the first word of this album’s title, I would not...  (2003) » Read more

Tempest - The 10th Anniversary Compilation – When I think of hard working bands, Tempest immediately comes to mind. You can find this band at Celtic festivals, Highland Games, and clubs across America. Tempest performs traditional and original...  (2000) » Read more

Outrageous Cherry - The Book of Spectral Projections & Supernatural Equinox – Since its founding in the early 90s, Outrageous Cherry has been working on their own method of updating 60s psychedelia for a later generation. Matthew Smith’s songwriting often captures the...  (2005) » Read more