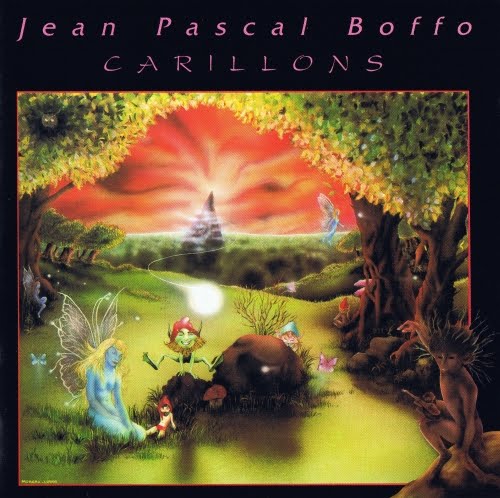 A most welcome reissue of one of Musea's finest releases ever, Jean-Pascal Boffo's second LP from '87. In the 70s, he was the guitarist with a Genesis inspired group called Mandragore, which later evolved into the band Troll, Troll's sound was heavily Magma influenced, similar to bands like Eskaton. Unfortunately, the only recordings they left behind were a couple of demo cassettes from the early 80s. (The later Troll LP was essentially a solo by drummer Michel Altmayer and violinist Nathalie Basset.) After the original Troll called it a day, Boffo joined up with the then-new Musea label, whose first release was his first album Jeux de Nains. This instrumental workout contains the essence of everything he had done up to that point in time — a brilliant guitar album with strong symphonic and zeuhl influences. For reference points, the soaring electric passages may at times remind of Steve Hackett, the quiet passages of Anthony Phillips, yet musically it's in an entirely different context — uniquely French, sometimes playful, sometimes foreboding, and often with benefit of lush orchestrations. The bottom end obviously comes from the zeuhl school: that throbbing pulsing bass style pioneered by Paganotti and Top are evident throughout. Aside from Boffo (guitars, bass), the lineup includes Carlos Pavicich (bass) and Denis Batis (synths). A complaint I frequently heard about the original LP release was the use of programmed drums. That has been remedied here on the CD reissue, remixed with real drums from Herve Rouyer, breathing new life into all tracks. Two Troll songs "Le Cycle du Cristal" and "Conte a Rebours" were brought forward and reworked. "A Cordes Imaginaire" is a gentle acoustic guitar piece buried in dense orchestrations, and closes the disc nicely. "Carrousel" and "Bienvenue au Pays" are catchier tunes with hard hitting guitar that define the angular side of his sound, both fusing a zeuhl bottom and some symphonics to the sound that is uniquely Boffo's. "Fête en Perspective" illustrates the playful side of his writing, while "Joyeuses Pâques" approaches with gentle acoustics, building to a firestorm of colorful electric soloing. The tracks have been reordered from the original LP release, a minor gripe which I'm sure I'll soon get over, plus a song has been added "Le Retour de Nains" which appeared on the original Enchantement compilation LP. Overall this is certainly one of the most welcome reissues of the year, and one I'd recommend highly for everyone.