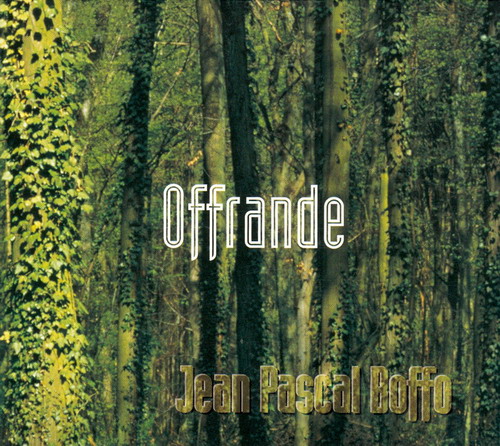 Always a surprise, each new album by Jean-Pascal Boffo is a radical departure from all those that preceded it, and his latest Offrande is no exception — this time operating within a four-piece framework of guitars, contrabass, soprano sax, and drums. Gone are all the African drums from his previous Nomades, this is a more pure — and positive sound that, in spirit at least, harkens back to his first two Musea albums Jeux de Nains (...still waiting for a reissue, ahem) and Carillions, yet maintains much of his jazzy style of late. One can't consider the musical range of Boffo's five solo releases and not come away convinced that he is either a genius, a chameleon, or a total schizophrenic. His guitar work here, as always, is masterful and refined, truly in a class by itself, along with his sense of composition and arrangement. His recent mercenary work with Christian Decamps gives no clue of what he is capable of left to his own creative devices. The four musicians work in a more relaxed composed style, with enough freedom to breathe life into every note, but not so free as to sound improvisational. Quite a bit of ground is covered within the twelve numbers, yet it all holds together surprisingly well, mostly because none is a radical enough departure to upset the balances that play from one track to the next. As always, this is another winner from monsieur unpredictable.