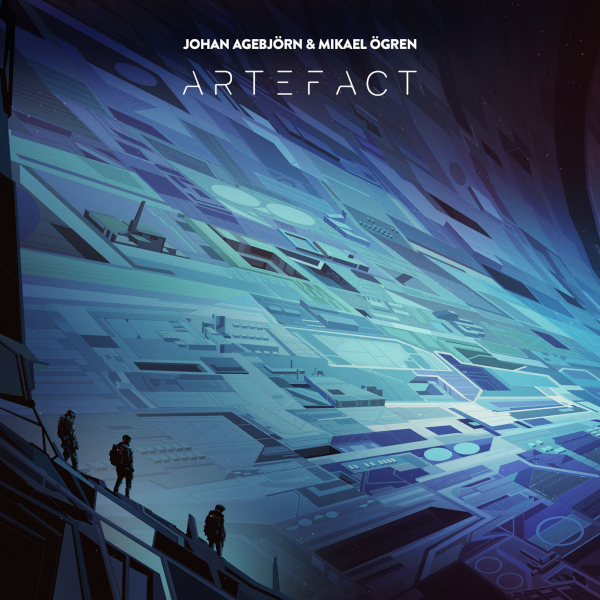 The Swedsh synthesizer duo of Johan Agebjörn and Mikael Ȍgren are no newcomers to the electronic music scene, as their previous Spotted Peccary collaboration We Never Came to the White Sea from 2017 offers ample evidence. That release was based on a theme chronicling a road trip through the forests of Russian Karelia; historically part of Finland and Sweden, it has been occupied by Russia since the early 1900s. Their latest collaboration, Artefact, serves as an unofficial soundtrack inspired by Arthur C. Clarke’s futuristic novel Rendezvous with Rama, from the album’s twelve tracks right down to the cover art by Killian Eng. Artefact creates vivid sonic imagery for the listener, from the strange planet’s surface to standing alone on an the unexplored moon to the feeling of silver sand ifting through your fingers. The warmth of vintage analog sounds combines with modern sounds to create a credible science fiction soundtrack for the story that served as the inspiration for Agebjörn and Ȍgren for this endeavor. Their electronic styles range across the board from trance to floating ambient to explorative atmospherics, often all at the same time, with unusual found sounds grafted into the mix at key points for great effect. On the first two tracks, “Extravehicular Activity” and “Passing the Gates,” they are joined by Stefan Strand (Between Interval) as co-writer and co-performer. On “The Hall of Crystals” they are joined by vocalist Martina Björk for some wordless yet powerfully soaring sounds. On “Octapod” the duo is joined by Johan Emmoth of Le Prix for some provocative synth sounds that differentiate it from most of the other tracks here. Other standouts include “The Plain” and “ The Storm That Passed,” the former a slow building atmospheric with sparkly melodic strands, the latter offering deep thunderous sounds over which dreamy melodic sprites wander in and out of view. “Monitoring the Zooids” takes an even deeper dive into an unusual and descriptive soundworld where percussives freely mingle with atmospheric sounds and strong melodies. Artefact presents an abundance of interesting electronic material, even for the listener who may have little or no knowledge of the Clarke novel.