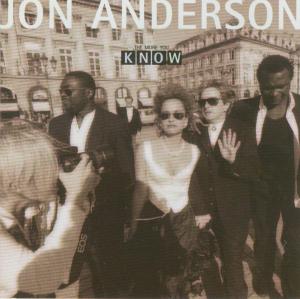 I knew there was something fishy about this CD when I looked at the song lengths - all are nearly identical. Pre-planned? Hmmmm, could be. After six solo releases since 1994, a vacation in Bermuda would have provided Anderson with a requisite stop gap to allow reflection on his future. Unfortunately this wasn't to be. Why unfortunate? Because it could have kept him from the mistake of producing The More You Know. It seems he had some pop material which he needed to rid his system of, and here it is. This one represents the lowest point of his career, the result when "World Beat" inspires songwriters to become "international artists," a euphemism for the phenomenon where all musicians sound the same, whether from Britain or Tibet. Cheesy non-percussion conspires to turn every song here into bland radio-friendly drivel. Even moments of quiet reflection are painted day-glow pink by that prerequisite for 90's pop music - the groove. The beat. Boom - bap, baboomboom - bap. With such an import placed on drums can't at least a real person play them? Outside of Jon's wonderful vocal delivery, nothing of any redeeming worth can be found here. There are millions of people to whom you could recommend this CD. None of them however are fans of Jon Anderson! Jon, your Song of Seven, Animation, and a handful of others sit proudly in my collection, but here I have to put my foot down. Not that I'm expecting Olias of Sunhillow every year. It can't be done, but that is just the point - when you are too prolific the quality tends to dip, as this release obviously shows. For now I think a healthy rest and reflection period is in order. I have no doubt something magnificent from you awaits us ahead.

Secret Oyster - Vidunderlige Kælling – While listening to this album, I find myself often comparing it to Camel’s Snow Goose. For one thing, there is a certain stylistic similarity, as they are both keyboard-centric instrumental rock...  (2006) » Read more