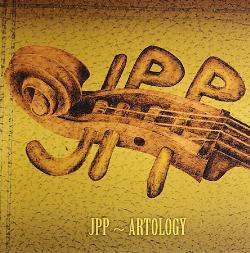 Just when you thought you'd had enough of Nordic fiddles, along comes this little gem from Finland. I like Scandinavian folk music as much as the next guy — probably more, actually — though I'll admit to approaching burnout on the genre. But I forced myself to pop this one into the player, and found myself enjoying it quite a bit. Given their limited palette of four fiddles, a harmonium, and acoustic bass, they manage a surprising diversity of sound, mixing modern with traditional, Nordic with foreign, and energetic with reflective. They wisely draw from other traditions as well, including some American swing, a Middle Eastern sounding piece, and a tango, providing a Finn's eye view of music from other countries. Sometimes the arrangements mass the fiddles together for rousing unison melodies, while at other times they split apart for harmonies or more intricate counterpoints, and even include some uncharacteristic pizzicato work. If there's a flaw, it's that the four fiddles blend together so much that none of the players is left with an individual voice. But if that was music's sole virtue we wouldn't need symphony orchestras. All of the music is original, composed by Arto Järvelä, and it is testament to his talent and sensitivity that it all works so well. I wonder what would happen if he tackled a style even further afield, say RIO or zeuhl...

Yūgen - Iridule – This is the third Yūgen release, and the band continues to grow by leaps and bounds. This time out the composing duties went to guitarist Francesco Zago, who seems to be influenced by a combination...  (2011) » Read more