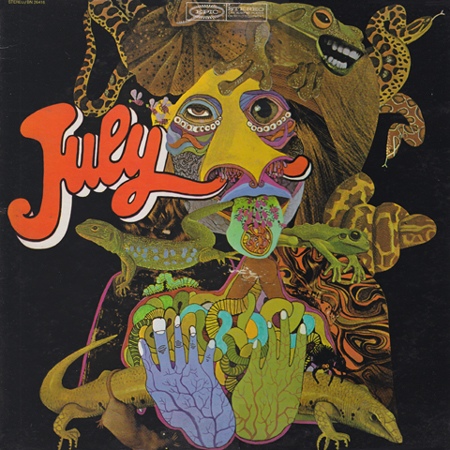 1967: a year for flower children and fledgling bands to gather together, smoke a bag, and experiment with new musical ideas, albeit sometimes sappy, but fun. Tony Duhig and Jon Field were two of those eager musicians ready to make a name for themselves; a guitarist and percussionist looking to make a dent in the burgeoning English pop scene. There were several paths one could venture: the trendy sounds of Pink Floyd (and copy cats, Tomorrow) or more sophisticated pop music with string arrangements (a la Sgt. Pepper or Days of Future Passed or even Procol Harum's first album). July's style is smack dab in the middle of both of those polar extremes. It's very light listening, with vaguely musical ideas, using fuzz guitar and tabla but in vogue with the times. The CD re-release of this obscure album has some amusing liner notes, but it's a bit difficult to render some technical information. Lead vocalist Tom Newman (engineer for Tubular Bells) is stylishly weird, relying heavily on an effects modified delivery. It's surprising that Duhig and Field survived the thin green haze of this juvenile musical attempt to later form Jade Warrior, but then I don't see their names listed as songwriters, although there is a natural transition to the band's first work on Vertigo. Maybe they were only naive contributors and don't have to bear the brunt of responsibility for a this amusing psychedelic splash! But I guess you have to begin somewhere, even if your roots are those you'd rather forget and hide under a paisley-colored table.

John Is Clearly No Longer Beloved