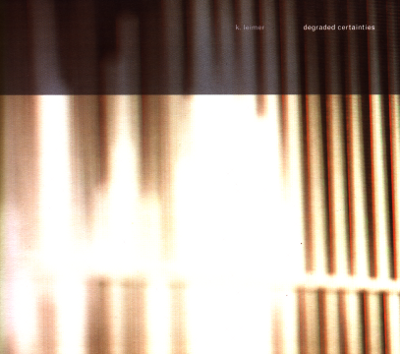 Kerry Leimer's newest work delves deeply into the process side of ambient fabrications. Here, he gathers source elements that include strings, bells, and percussive sounds, and then runs them through signal reprocessing to arrive at a collection of tones or elements, which he then arranges and layers — randomly or not — into distinct soundscapes (each curiously at or near 12 minutes). The timbres shift from one piece to another, "Allotropy" studying intertwining violin tones, for example, while naturally occurring sounds populate the meditative "Hommage." But Leimer takes each track beyond mere ambiance by mixing in contrasting tones and textures — sometimes bordering on distortion — that makes each a fertile study in audio dynamics, despite everything staying within a fairly constricted volume parameter. For the most part he operates somewhere between ambient and minimalism on this album. For example, on "Common Nocturne" an elegant piano creates a solemn and placid sound field with widely spaced notes and chords hovering over residual harmonics and underlying tonal ambience. And on "French Opera" plucked strings are spaced out rhythmically with an almost clockwork regularity while a rolling wave of harmonics ebb and flow around them. The recordings are crystal clear with nothing to mar the pristine aural vistas, though some may find there's a bit too much activity within these pieces for them to work as a background for meditation. But for my money a little mental stimulant is the best catalyst for inner awareness.

The Aristocrats scold a small object in space