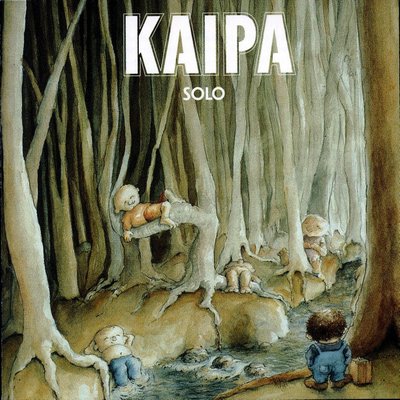 Kaipa's third studio album from early '78, and probably their last one of any merit, is a solid effort, instrumentally strong like the previous two, although seeming to encompass a bit more variety — and more accessibility due to the addition of dedicated lead vocalist Mats Lofgren. Their sound is a strong melodic rock built on guitars, bass, drums and keys, with roots in traditional Swedish folk to some extent. Some comparison to Camel might be in order, perhaps a bit of pre-Dark Side Floyd as well. Some passages rely heavily on the keys to produce a dreamy symphonic atmosphere, while guitarist Roine Stolt delivers the pyrotechnics, recalling the best of classic period solo Hackett, or even Eric Stewart (10cc), but more than anything Stolt displays amazing versatility, and seems to be quite at home regardless of how duty calls. A full half of the tracks here are completely instrumental, the balance featuring lyrics in Swedish. A few of these vocal tunes flirt with mainstream tendencies, but the bulk of the material here is fairly powerful as progressive rock goes. The last two tracks of the original album, "Total Förvirring" and "Sist På Plan," both clocking in at over seven minutes each, should go far to dispel any doubts. Several of the tunes here were remixed slightly from the original LP, and overall should be considered an improvement. Three bonus live tracks round the disc out nicely. Definitely one worth owning.