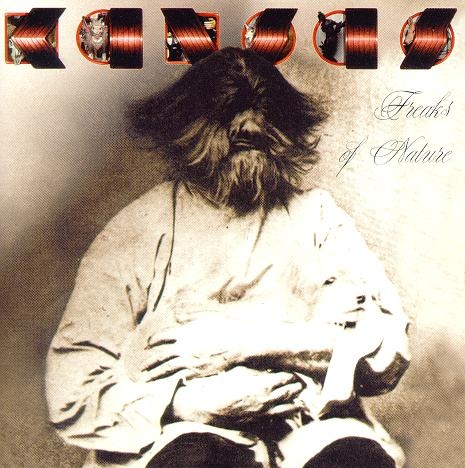 Their first studio album in seven years, Freaks of Nature marks the return of Kansas. Well, actually they haven't been gone. Even though this marks the first studio release for the current lineup, the same unit has been playing together since 1990! Following the release of their last studio effort in 1988, In the Spirit of Things, Kansas has been touring almost constantly, playing hundreds of live shows over the past seven years. While Freaks of Nature marks a new chapter in the Kansas story, there are still a lot of ties to the past. Kansas has a violinist again for the first time since 1982. Longtime associate Jeff Glixman returns to the producer's chair. Founding member Kerry Livgren, though not a member of the current group, pens one of the tracks on the new album. The sound of the album recalls moments of the Kansas of yesterday, yet for the most part is quite different. There are no 10-minute epics or long instrumental sections. Most of the songs are about five minutes in length and generally sound heavier than the earlier material did. Guitar and violin are the dominant instruments on the album, while the keyboards are conspicuously secondary, especially considering their prominence on the band's previous recordings. These differences shouldn't be all that surprising, considering this is a very different band than the 70s band which featured two guitarists and two keyboardists. Lead vocalist Steve Walsh sounds much better on this album than he has in the last 10 years – certainly worlds better than he did on the 1992 Live at the Whisky album. While the sound quality of this album is excellent, the production is minimal, giving the recording a live feel – very much like their concerts.

Frontman Walsh has always been a rocker at heart, and as the primary songwriter on this collection, it shows. The opener, "I Can Fly," and the title track are fast driving tunes with some nice rhythms and riffs. Even the slower paced numbers have a powerful edge to them. While clearly not as "progressive" as their heyday albums, "Freaks Of Nature" contains solid material that should appeal to fans of their previous work as well as those who like violin and guitar led melodic rock.

Paolo Angeli - Plays Frith & Björk - Tessuti – To paraphrase Shakespeare, there are more musics in heaven and earth than are dreamt of in your CD collection. Unless you have one of his previous releases, Paolo Angeli is probably an example of...  (2008) » Read more