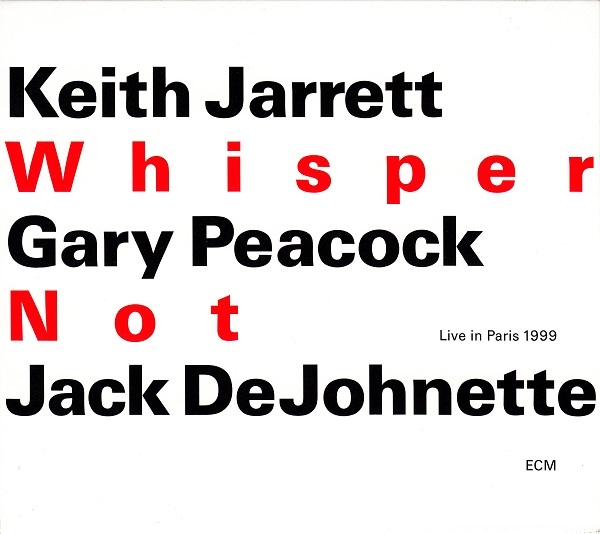 Recorded in mid-1999 in Paris, Whisper Not is the first recording of the trio since Jarrett took a health break in 1997 and 1998. He suffered from CFS (chronic fatigue syndrome). To do a whole gig then seemed impossible. He did manage to record himself at his own studio playing rather short tunes, mainly jazz standards, one at a time with long breaks in-between takes. These songs are compiled on a brilliant CD entitled The Melody at Night, with You. A must-have and a very numerous listen for any Jarrett fan. As for Whisper Not, Keith Jarrett, Gary Peacock, and Jack DeJohnette are now the greatest jazz trio around. They’ve been together as a trio for about 20 years. They’ve always been good, but they have consistently gotten better with each passing year. Keith is understandably not as “vocal” on this recording, and this might be good thing for those who find his vocalizations at all annoying. However, his playing seems to have benefited from that two year CFS break and a lot of musical introspection. He’s playing better than ever, more mature and musical, delving deeper. Every track is an intriguing balance of intuitive interplay between the players and outright, yet very seasoned, monster chops. Along with standards such as “Round Midnight,” “Groovin’ High,” and “What Is This Thing Called Love,” there are two Bud Powell tunes, “Bouncing with Bud” and “Hallucinations” – all killer takes. Their interpretation of ballads such as “When I Fall in Love” is absolutely breathtaking. This is obviously a highly recommended disc. Get up and get it!

(Tom Newman) - Variations on a Rhythm of Mike Oldfield - David Bedford – This is a four track EP, and is basically a Tom Newman album. It's confusing, I know. This is some of that stuff you know Oldfield and Co. did for laughs (when perhaps beer and worse entered the...  (1998) » Read more