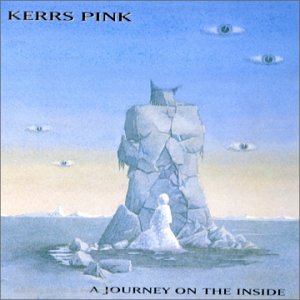 The Norwegian band Kerrs Pink has been around for 21 years now and they’ve finally released their third album. The support Kerrs Pink received from Musea in reissuing their first two albums inspired the band to record and release what I would label as the most commercial Musea CD ever. In the mid-seventies many bands attempted to produce concept albums, some were successful but most weren’t. A Journey on the Inside follows in the footsteps of the successes of Pink Floyd’s The Wall and Genesis’ The Lamb Lies down on Broadway. Here we have a wide range of musical styles, catchy tunes, and a coming of age story told through the media of music, lyrics, and CD booklet. The story concerns Roy, a young man who realizes that so far he has achieved very little in life. As a result of his depression, Roy meets Mary who leads him on a hallucinogenic journey where he confronts his past. He overcomes his barriers only to realize that he might have been too selfish and asks several philosophical questions. Should he have tried to live with evil? Can you kill evil? Do we have the right to? Are there better ways of defeating it? Roy has come of age and now faces adulthood and maturity. In addition to the music these universal story elements, in my opinion, were also instrumental in the success of the above mentioned Pink Floyd and Genesis albums. Kerrs Pink continues this tradition. Their trademark has been the integration of Norwegian folk music into a progressive rock context. There is no finer example of this merging than on A Journey on the Inside. With the addition of tin whistles Kerrs Pink has now broadened their music to include Irish sounding folk-rock similar to Horslips. One of my favorite songs on the album is the beer hall ballad "The Downtown Happy-Go-Lucky Bunch." The simple melody and oompah beat draw you in to making you want to grab a stein and sing along with the crowd. Kerrs Pink’s 21 years in the business has paid off. They have successfully produced a concept album integrating the best elements of Pink Floyd, Jukka Tolonen, Steve Hackett, Jethro Tull, Horslips, Amazing Blondel, Genesis, Yes, and Peter, Paul, and Mary. The synergistic combination of folk, folk-rock, beer hall singing, acoustic ballads, dance music, and full blown symphonic rock makes for a very enjoyable listening experience of broad appeal. Musea’s packing of a full color picture CD and 14 page booklet of lyrics, story, and history rounds out a picture perfect release.

Take equal parts of progressive rock in the vein of Pink Floyd and Camel, and the traditional folk music of Scandinavia and other parts, then put it together in a seamless way, and you have the music of Kerrs Pink. With this, their third album, their sound has matured considerably into a very cohesive fusion of these styles, much as the Irish band Horslips did on their classic Book of Invasions and their other albums of that same period. With A Journey on the Inside, Kerrs Pink has combined precisely the right amounts of each with an overall accessibility and determination that all work together to make this one truly powerful release. Functionally, the music is rock at the surface, but folk at the core, which surfaces in the music in varying degrees throughout this 70+ minute concept epic, the story of a young man who has great potential but has achieved little in life. With the help of "Magic Mary," who lulls our hero into a trance, he goes on a journey confronting the elements of his inner self that prevent him from success, all represented here as people in a fictitious village. The lyrics are sung in English by keyboardist Per Oyvind Nordberg and guest female vocalist Heidi Drengsrud Jahren (as Magic Mary), yet a full half of the tracks here are instrumentals. The bulk of the material was written by Nordberg and longtime guitarist/flautist Harald Lytomt, with the occasional track by bassist Jostein Hansen. There is plenty here to be impressed with, tight playing, beautiful solos, magical moody segues, and powerful melodies. If you doubt, check it out! I'm certain that most prog fans will find this to be an enjoyable journey.

Oysterband - Here I Stand – Oysterband (originally The Oyster Band) has been making music in their own unique and developing style for more than a decade. I would hesitate to call them a post-punk equivalent of Fairport...  (2000) » Read more

Lucio Fabbri - Amarena – Fabbri is probably best known for his tenure as violinist with PFM in their post-Passpartù period, and with Claudio Rocchi, and also for some of the work he's done with Demetrio Stratos. As...  (1995) » Read more

Circa - Live – Billy Sherwood’s plan to get some kind of Yes-related project into play resulted in this DVD from one of the band’s first performances. On board are Yes stalwarts keyboardist Tony Kaye and...  (2008) » Read more