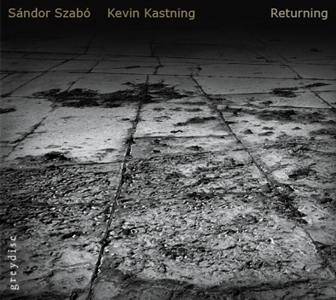 For readers who have memorized every review this magazine has published, I won't have to remind you that we've covered the two previous releases by this duo of unusual guitarists. For the rest of our readers, I will clarify that when I say "unusual guitarists" I actually mean they play unusual guitars, not that they themselves are unusual (which may or may not be the case and would be irrelevant anyway). Szabó plays 12-string baritone guitar; Kastning is listed with three different instruments, one of which is a 12-string extended baritone guitar, a custom instrument built in the baritone guitar range (almost as low as a bass) but will all six primary strings doubled (usually at the octave, though he's been known to use all sorts of other tunings). All of which should indicate to you that this is an instrument with rich sonic possibilities. The music is among the most pleasant improvisation I've heard, with delicacy and subtlety ruling, not intensity and angst. Unlike the previous releases from the duo, the cover doesn't clearly specify that all the pieces were improvised, and they are credited as joint compositions. The tones of the guitars are so rich that even dissonances sound beautiful. This CD serves as a gentle reminder that there's more to the guitar than the aggressive, heavily-amplified wankery generally associated with "heroes."

French TV - Virtue in Futility – French TV hails from Louisville, KY and has a handful of releases to their name since their inception in the early/mid-80s. Led by bassist Mike Sary, they play an aggressive, complex, and somewhat...  (1994) » Read more