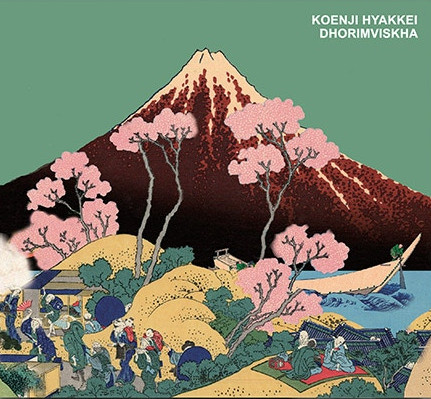 Anyone who’s heard any of Koenjihyakkei’s previous work will know to expect a high-energy adaptation of Magma’s classic zeuhl sound, featuring complex rhythms, singing in an unknown language, and supremely tight arrangements. The personnel has changed a bit from their previous studio recording, Angherr Shisspa (2005), with Taku Yabuki taking over from Miyako Kanazawa on keyboards, a woman known as Ah (or AH) replacing Kyoko Yamamoto on vocals, and the addition of Kei Koganemaru on guitar. Tatstuya Yoshida (drums), Kengo Sakamoto (bass), and Keiko Komori (reeds) are still on board. As amazing as the previous albums are, I have no trouble saying that this one is the best yet. The compositions, credited to Yoshida and Yabuki jointly, are fascinating and imaginative, often built up from hypnotic keyboard patterns (usually piano) and precise drums, with sax and lead vocals executing acrobatic melodic lines that pull together elements of RIO with jazzy post-bop inflections. Dhorimvishka is a perfect example of musicians possessing superb technical skill playing music that is incredibly difficult, and while I wouldn’t say they make it sound easy, I would say that it sounds musical and expressive, not simply a technical exercise. How exactly they manage this feat I’m not sure. I’m reminded of the first time I saw a performance of Heitor Villa-Lobos’ “Quinteto (em forma de chôros),” where I was awestruck by the ability of the musicians to pull it off, but equally impressed by the musicality of the piece. Angherr Shisspa achieved a somewhat more open sound due to the lack of a guitar, but Koganemaru doesn’t overpower the arrangements, instead functioning as an equal participant. He even plays some acoustic in the opening half of “Palbeth Tissilaq,” which has a loping 13/8 rhythm and a lovely piano solo before bursting into a much more aggressive mood for the second half. There are no weak points, absolutely no filler, and far too many highlights to mention. Koenjihyakkei is absolutely in the top echelon of bands in any style, and the fact that they’re getting positive press outside niche publications might offer proof that (at least sometimes) sheer talent will win out over trendy fashionability. It’s simply stunning from the first notes to the last coda of the title track, and easily among the top albums of the decade. Seriously, it’s that good. A deluxe 2LP version is forthcoming which is to include an exclusive bonus track.

Hermes Orchestra - Live – Dan Hermes is a jack-of-all-trades and music is just one of his passions. On this album professionally trained musicians play the compositions of Dan Hermes. All this was performed live at the Tremont...  (2007) » Read more

Bow down to the awesomeness of MoeTar