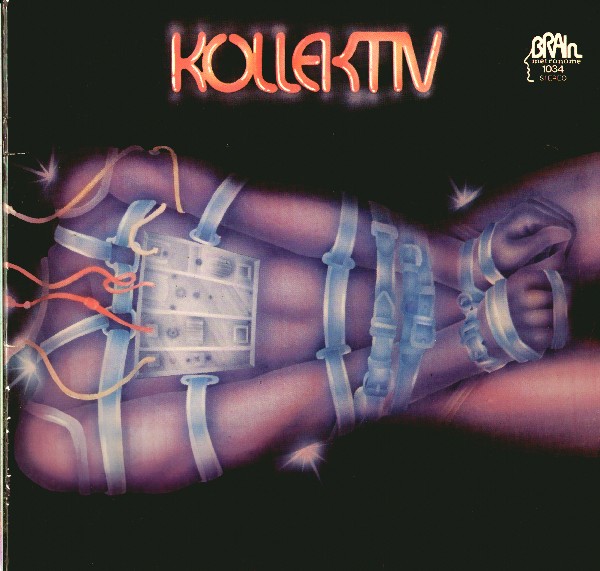 Kollektiv, an obscure Krautrock band, released their self-titled album in 1973. Three months later they recorded an hour-long session for SWF radio in Baden-Baden. Long Hair released this session in 2001 as SWF-Sessions Volume 5. In 2005 Long Hair released some live recordings titled Live 1973. Now Long Hair has released Kollektiv’s debut album that was engineered by the legendary Conny Plank. Kollektiv consists of the four original tracks (“Rambo Zambo,” “Baldrian,” “Försterlied,” and “Gageg”) and four bonus tracks recorded in 1976 (“Intro,” “Pull Moll,” “Pap-Jack,” and “Rozz-Pop”). Their music is close to Organisation and early Kraftwerk, a spacious fusion of rock and jazz involving unusual structures for the time and using electrified flute and saxophone. Their improvisation style and music bears many similarities to Xhol. “Rambo Zambo” is a crazed improv with cascading flutes, “Baldrian” is an atmospheric piece played on a handmade string instrument, “Försterlied” is a short noisy chaotic song with some German text thrown in, “Gageg” is their opus in three movements based on the notes g-a-g-e-g and the flute playing is quite beautiful, “Intro” is a cool duet of acoustic guitar and violin, “Pull Moll” is a jazzy improv piece with some inventive electric guitar chops, “Pap-Jack” is the longest track at 13:17 and opens with strange processed sounds that slowly builds to a bass driven jazz improv, and “Rozz-Pop” closes the disc with more cool jazz improvs. Highly recommended to all Krautrock fans.

Eroc - Eroc 4 – Revisited Records has now released the fourth Eroc solo album, recorded in 1982. For those of you who don’t know, Eroc is the pseudonym of Joachim Heinz Ehrig who was Grobschnitt’s drummer turned...  (2008) » Read more