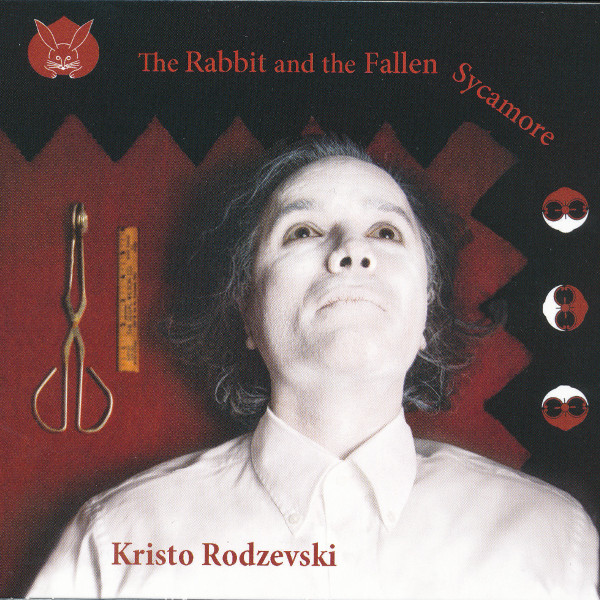 The Rabbit and the Fallen Sycamore is an album that takes many listens to reveal itself, and even after maybe a dozen times through, I’m still not really sure what to make of it. Obviously I don’t dislike it, or I would have been able to write a negative review after one or two listens. On a conceptual level, I rather like it. Kristo Rodzevski strikes me primarily as a poet who sets his words to music, rather than a singer-songwriter. In this respect, he can be compared to Peter Blegvad or even Jim Carroll, and like those two, his voice is not the kind to win singing contests, being on the thin side and slightly quivery. What really sets him apart, and provides much of the album’s appeal, is the group of musicians he’s recruited to fill out the arrangements. In addition to his own acoustic guitar, we hear Mary Halvorson on electric guitar, Kris Davis on piano, Ingrid Laubrock on tenor sax, Brian Drye on trombone, Michael Blanco on double bass, and Tomas Fujiwara on drums. Halvorson and Fujiwara we know from Thumbscrew, and the others are also known from the New York avant-jazz scene. Rodzevski (properly Rodževski) is from Macedonia, and there are hints of unusual phrasing and an accent in his English singing, though in general the lyrics are good — I think he repeats “Ralph Lipschitz, why did you change your name?” a few too many times in “Your Name,” but other songs feature many interesting turns of phrase. Musically, it’s Halvorson whose playing most defines the sound of the album, full of unusual voicings, dissonant intervals, and freaky effects, though with her signature semi-clean tone. The rhythmic backing from Blanco and Fujiwara is jazzy in an unclichéd way, with nods to rock rhythms due to the songs’ straight eighth notes. The horns put it firmly in the jazz camp, with parts that stray well outside what you’d normally hear in a singer-songwriter context. The really interesting thing about this music is that Rodzevski is not really a jazz singer, and the songs don’t really feel like jazz songs (admittedly a highly subjective statement), with some elements of Eastern European folk and a touch of art-punk in the mix. In short The Rabbit and the Fallen Sycamore is unlike anything you’re likely to have heard unless you’re familiar with Rodzevski’s two previous recordings with Halvorson, Blanco, and Fujiwara. Just don’t expect to get it on the first hearing, and give it the time to sink in.