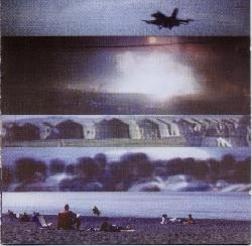 I’m not going to get into any generalizations about whether Italian bands can be any good at psychedelia – certainly examples can be found at all levels of quality. This release from Krypästhesie will not do much to settle the argument one way or the other, as it is not horrible, but not particularly exciting either. No Age is fairly noisy much of the time, with heavily distorted guitar and trebly bass throughout much of its length. They do manage to come up with some good grooves, as on “Tetano,” which has some nice keyboard parts almost like a harsher version of Ozric Tentacles, but the vocals spoil the mood with unappealing harmonies and screaming. Even the quiet moments, such as on “Totto Passa,” with acoustic guitars and Middle Eastern percussion backed by a subtle wall of distortion, are marred by the vocals. There are a number of parts I like quite a bit, such as the off-kilter “Stella – Machina – Guerra” with its distorted skittery electronic beats, strange noises and mangled vocals. But to offset that, there are tracks like “Ent(h)omologia,” which never seems to gel and relies of the vocals for far too much of its eight minutes. Overall, I would say this is a band with a few good ideas, sometimes lacking in execution, and badly in need of a better singer.

Dwight Ashley & Tim Story - Standing + Falling – Tim Story has released a volume of minimalist, ambient, and electronic works going back to his early 80s albums on the Eurock label – In Another Country being a standout, later moving to Hearts...  (2006) » Read more

Dizzy Mystics Send Us a Letter