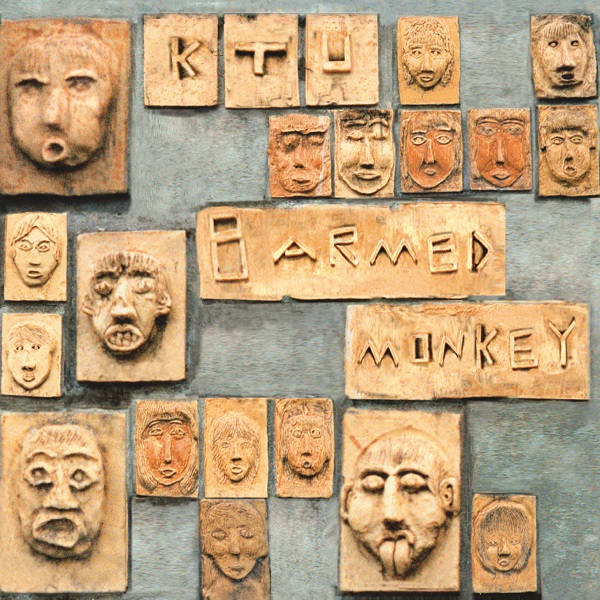 I don’t suppose “King Crimson with accordions” was high on anyone’s list of expected musical combinations, but here we are, and I’m glad somebody thought of it. The King Crimson part comes courtesy of Trey Gunn and Pat Mastelotto (who also play as a duo called TU); the accordion part comes from two Finns, Kimmo Pohjonen and Samuli Kosminen, who play together under the name Kluster. Kluster + TU = KTU. This release is a seamless melding of planning and improvisation featuring four musicians who do not recognize boundaries between styles and techniques. For those who fear the accordion, I offer some comfort, for today’s accordion can be augmented in many ways, becoming a controller for electronic instruments, and often retains none of its traditional sound. Back in April of 2004, these four got together for a series of concerts in Finland and Japan, and the five tracks presented here were recorded at those shows, although they do not really sound like live recordings: there’s no audience noise, and the four of them manage such a mass of sound that you’d swear there were overdubs. Live sound manipulation helps with that. Gunn and Mastelotto frequently lay down grooves reminiscent of latter-day Crimson, though with less of the interlocking note patterns, and Pohjonen and Kosminen fill things up with chords, melodies, and sound effects. It works amazingly well, complementing experimentation with catchy grooves.

Germinale - Germinale – One of the better of the new Italian progressive bands, their eponymous debut just escaped the second part of our "New Italian Progressive Rock Scene" overview back in issue #4. So with the...  (1996) » Read more