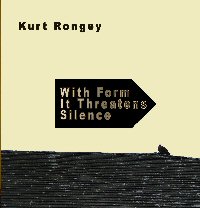 Quite a few years ago — I think it was after I first heard Echolyn — I devised a new sub-genre of progressive rock, part of my own eccentric system of categorizing music. I called this sub-genre "bright" prog, because the overall tone of the music seemed so bright, relying on keyboards with trebly tones, high-pitched vocals, and a somewhat understated low end. After a little thought, I realized that you could probably work backward and throw Starcastle into the same category. All of which serves to introduce a new entry into the roster of Bright Prog. As with many of Kurt Rongey's projects (see The Underground Railroad), this album was a long time in the works, with the backing tracks done on a Kurtzweil keyboard back in 1993, tweaked a bit in 1995, and not finished (basically just adding the vocals) until 2005. So this is both a new release and a time capsule, with some attendant dated aspects. Certainly if you object to programmed drums, you'll want to stay away, but for my ears, the quality of the composition trumps the artificial rhythms — and it seems that a kind of mechanical sound was part of the intended aesthetic (the three-part "Mechmech" suite is an obvious clue). So if you're up for some imaginative meditations on technology done in a prog-meets-electronic style, this should suit you fine. In keeping with the technological attitude, he's made it available for download (complete with artwork) at his website rather than on physical media.

Rick Wakeman & The English Rock Ensemble - Live in Buenos Aires – One of Rick Wakeman’s several visits to South America gets the DVD treatment with this unique packaging of DVD and separate CD. Damian Wilson is Rick’s newest singer and his lead vocal captures...  (2003) » Read more