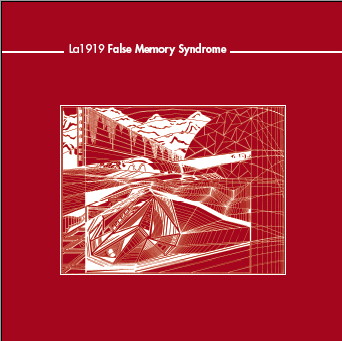 La 1919 from Milan has been around since the mid-80s, originally the duo of Piero Chianura (bass and synths) and Luciano Margorani (electric guitar and synths). In the mid-90s they began collaborating with drummers Chris Cutler and Charles Hayward, and other guests on voice, saxes, and clarinet. With the addition of drummer Federico Zenoni on False Memory Syndrome, they have officially become a trio. Shedding much of their post-punk and electronica baggage along the way, today their sound is in firm soundtrack territory with a seemingly strong Frippian / Crimsoid influence with evident jazz undercurrents and a healthy dose of avant garde experimentalism. The ten mostly instrumental tracks presented here are nothing if not adventurous, meandering through labyrinthine passages as they discover unusual sounds and mysterious textures. Compositions like “Il Sogno di FF” and “Progetti di Grandi Citta con Terraze” undertake some daring moves, but they also present some warm and compelling melodies amid the fabric of their arrangements, with superb playing at every turn. Much like KC in the mid-70s, or Bill Nelson to this day, La 1919 on False Memory Syndrome have a pioneering sound that knows few boundaries and pushes all the limits with abandon.

Miriodor - Jongleries Élastiques – It has often been said that in music, the rests are just as important as the notes. Well, apparently this message never got through to Miriodor. Once they get rolling, they don't stop until the end. ...  (1996) » Read more