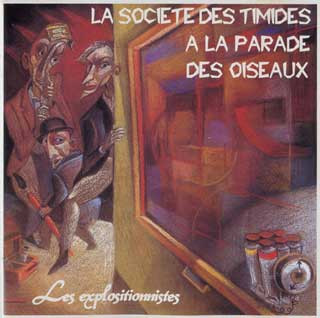 STPO stands for "La Société des Timides à la Parade des Oiseaux". Okay... I think that means "the shy people's society at the parade of the birds." This six-piece French ensemble has been around since the mid-80s, and operates in the area somewhere between the Etron Fou axis and Neo-Chamber styles, applying humor, avant-gardisms, ultra high energy theatrics, and a well rounded eclecticism. They cover a pretty wide field of material within those realms, using guitars, bass, contrabass, drums, percussion, saxes, mallets, and synths, plus a lot of unusual stuff like balofon and viola da gamba. The latter are used when they take on some of the neo-chamber / folk based pieces like "Sarajevo - Stepanakert" or ethnic styles on tracks like "Rouge, Bleu, Orange," which leads into the more RIO styled "Who's Afraid of Red, Yellow and Blue," where saxes, strings, and taped sounds are applied to quieter sections, punctuated by loud, funky bass driven sections supporting aggressive vocal outbursts. Definitely EFL territory, and although vocalist Pascal Godjikian is nothing short of excellent in a variety of styles, and musicianship is top notch all around, this is still fairly extreme music that is probably more excessive and explorative than most would be comfortable with in their daily musical diet. Still, for those who know this style of music and love it, STPO is the ticket. Recommended for the intrepid explorers, not the Marillion crowd.