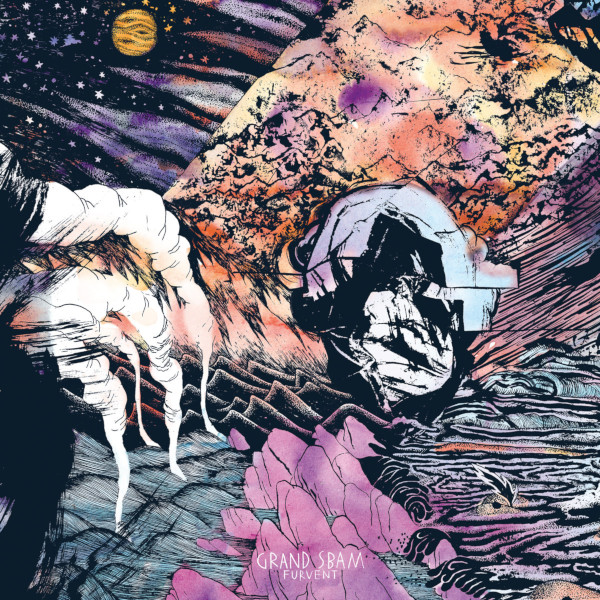 For the second album by Le Grand Sbam, the lineup has expanded, as has the sonic variety — this is still a band based around piano and multiple vocalists augmented by mallets and a rock rhythm section, but they’ve bumped up the density a notch. This is exceptionally complex chamber rock, RIO in the classic mode informed by modern math rock and zeuhl. Antoine Arnera (piano, electronics, vocals) and Guilhem Meier (drums, percussion, vocals) are the composers behind this meticulous edifice of insane music, and returning members Boris Cassone (bass, Mellotron, vocals), Jessica Martin Maresco (vocals), and Marie Nachury (vocals) are joined by newcomers Grégoire Ternois (marimba, percussion), Mihaï Trestian (cimbalom), and Anne Quillier (synthesizer, electric piano, vocals). Some of the vocals include French words, but many seem to be nonsensical syllables, which brings a bit of a Magma flavor to the mix, though the vocal parts tend to be more polyphonic and less grandiose than Magma. There are also some words that seem to be Chinese, specifically imitating the sound of Peking opera — I shared a track with a Chinese friend, and she was unable to understand anything they sang, and commented, “sounds exactly like foreigners singing Peking Opera.” (To be fair, Peking Opera is sung in a very stylized way that most modern Chinese speakers can’t understand without reading along.) Anyway, Furvent consists of one long track, “La Trace,” which presents more than 18 minutes of constant change, very much in the mode of avant-garde 20th Century vocal music augmented by interjections of electric bass and drums. It’s an outstanding piece of music, and leaves the listener exhausted after the journey. It’s followed by ten shorter pieces, eight of which form a suite of parts with names based on the Eight Trigrams of Taoist tradition. Aside from the Chinese theme, musically it’s more of the same wonderful chaos, with each of the sections featuring its own variation on the style. “Yi Yin I Ken (La Montagne)” is especially fun with weird synthesizer sounds added into the mix. The album finishes off with “Choon Choon” which has touches of a Gypsy sound melded with Gregorian chant and unconventional vocalizing. Le Grand Sbam is truly a unique entry in the Chamber Rock realm, and appealing on both visceral and intellectual levels.

Ahleuchatistas - On the Culture Industry & The Same and the Other – Of all the genre labels ever devised, math rock has to be one of the most annoying. It’s an insult both to rock and to math, and seems to me borne of two mistaken beliefs. First, that math is...  (2005) » Read more

Yanggeum at the Speed of Light