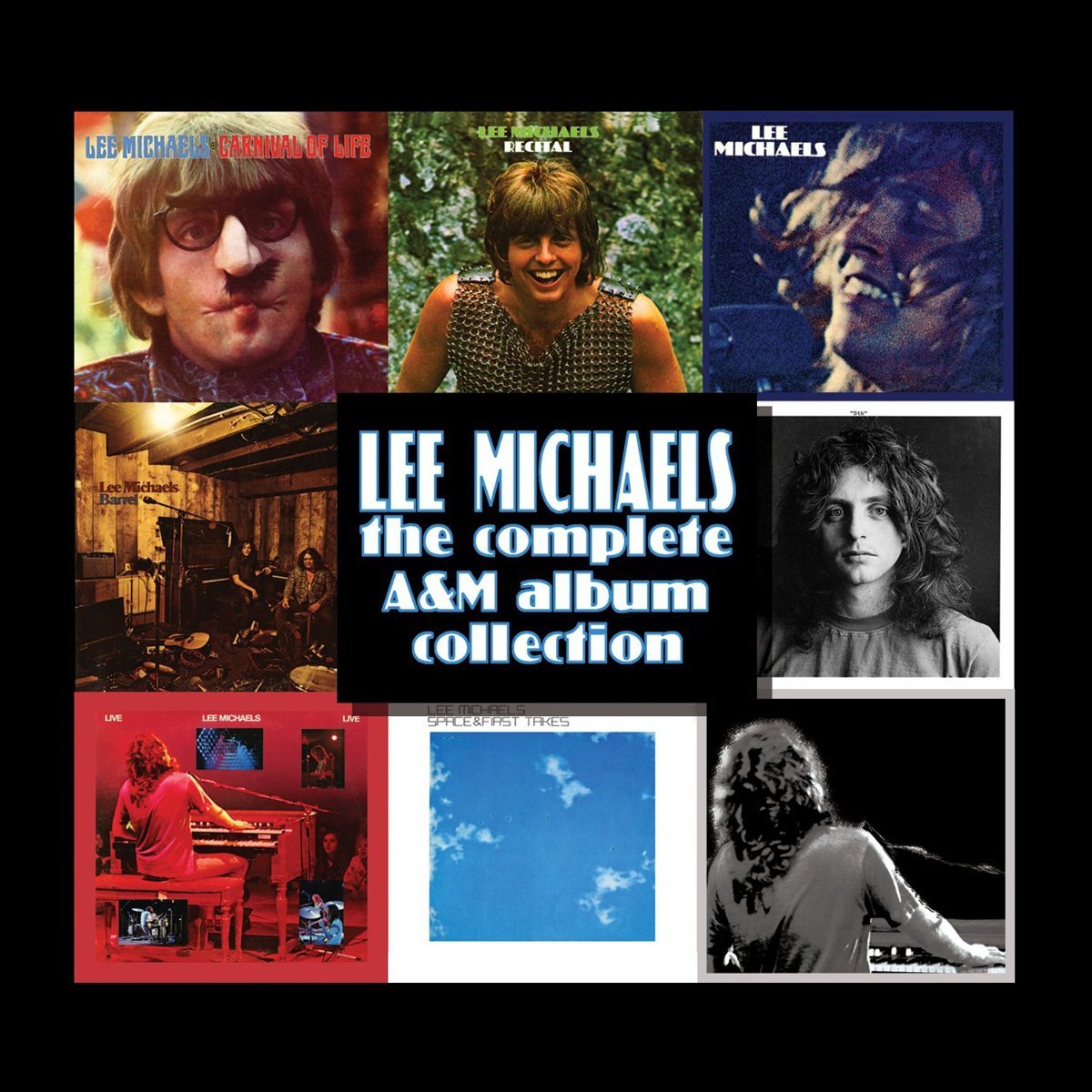 What could be more intense than a great singer and songwriter powered instrumentally only by the mighty Hammond organ and drums? For a major chunk of his recorded career and most of his live dates, that’s how Lee Michaels did it, blowing away his audiences and making new fans all along the way. He will be remembered by most as a one-hit wonder for his only AM radio hit “Do You Know What I Mean” which climbed up the charts into the top ten in 1971. Those of us who kept our ear close to the ground, plugged into the emerging FM rock radio during its infancy, knew about Michaels long before that, as he opened concerts for just about every band one can think of during the preceeding four years, and released as many LPs during that time. Although in 1973 he left A&M and moved to Columbia Records for a few more albums, his finest and best remembered works are contained in the seven albums presented here, spanning the years 1967 to 1973, topped off by a two LP live set recorded at Carnegie Hall. A few of these have been released before on CD, and there are numerous anthologies of his best known cuts floating around out there as well, but this is the first time all of his recordings from that period have been released together in a single package (and going forward, each of these discs will be available individually as well). 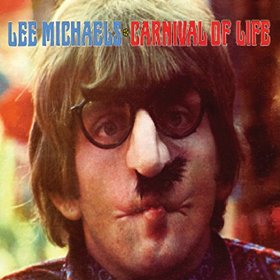 Michaels’ opening statement, from 1967, Carnival of Life, was an excellent debut that carried many of the hallmarks of the West Coast psychedelic period, while not being overtly psychedelic and remaining completely accessible. Different from his later works in that it featured a full band and a major role for guitar, it’s opener “Hello” was a minor FM hit at the time, but mostly went overlooked until several years later when his later works sparked interest in his earliest material. Michaels always seemed to straddle the line between serious musician and pop singer, and his next album, Recital from 1968, illustrates that perfectly as he walks that line, emerging as a seriously bad-ass organ player, while structuring many excellent compositions around piano, drums, and superb vocals, perhaps foreshadowing the emergence of singer / songwriters like Todd Rundgren in the early 70s. One standout track here, “The War,” took on the then-current subject of the Vietnam war, and became a minor FM hit in the process. The seven-plus minute closer “Spare Change” sports some serious proto-progressive cred. It was somewhere around this time that Michaels abandoned the full band concept and went it alone with his touring drummer Bartholemew Smith-Frost, or “Frosty,” and in fact for his 1969 eponymous third album – following complaints from A&M that he’d spent too much time and money producing the previous album which bore no hits, Michaels went into the studio with Frosty and recorded the entire album live in the studio in a single seven-hour session. The result was his biggest selling album to date, with a drum solo taking up half of the LPs first side, Michaels’ gritty, swirling Hammond dominating the instrumental mix, the song “Heighty Hi” getting airplay all over FM radio, and constant touring by Michaels and Frosty to support it. 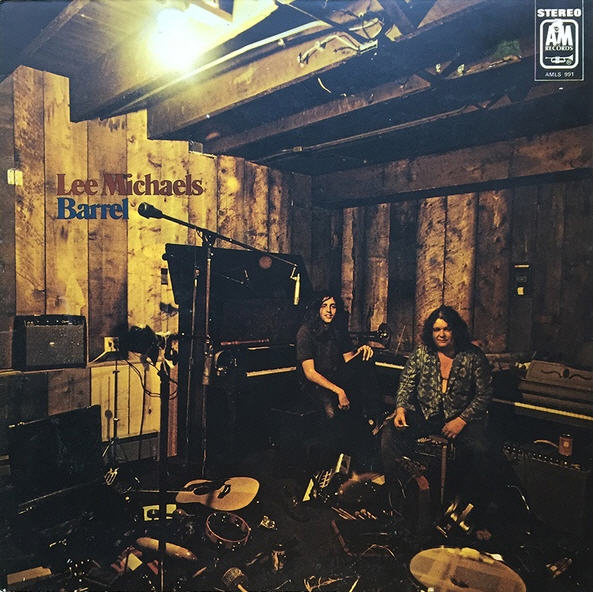 For his fourth album Barrel, Michaels returned to a more refined studio sound, with Frosty and guitarist Drake Levin on board (who played on Recital), though this time Levin is playing a lot more acoustic guitar. This time his songs tend to deal with a lot more serious subjects, and often are a bit dark; again we have songs about the war (“Thumbs” and some satire with his take on “When Johnny Comes Marching Home”), some anti-authority tunes (the anti-police “Mad Dog,” and a cover of Moby Grape’s “Murder in My Heart for the Judge”), and he somewhat retrospective “What Now America.” Not a lot of fun and cheer on this album, especially on the first side, but it does convey much of the mood of the younger generation at the end of the 60s. A&M complained about the poor sales and lack of hits on Barrel, which resulted in Michaels just wanting to produce a half-hearted album with an out-of-character poppier sound and a number of cover tunes on it. The result was “5th" which turned out to be the biggest seller of Michaels’ career, mostly because of the unexpected hit song “Do You Know What I Mean,” which ended up in the top-ten for a few weeks in ’71. The gospel flavored “Keep the Circle Turning” that opens sets a more upbeat tone that flows through the entire album, and makes this one very different than its predecessor. Frosty is gone, now replaced by drummer Joel Larson, this is again – like the third album, mostly built from Michaels array of keyboards, and drums as the primary instrumentation, with some occasional sax and backing vocals by Merry Clayton on the opener. The cover tunes were well chosen as well, drawing from his R&B roots: “Willie and the Hand Jive,” “Rock Me Baby,” “Ya Ya” and “Can I Get a Witness,” the latter which also became a minor follow-up hit, touching the lower reaches of the top 40 charts. 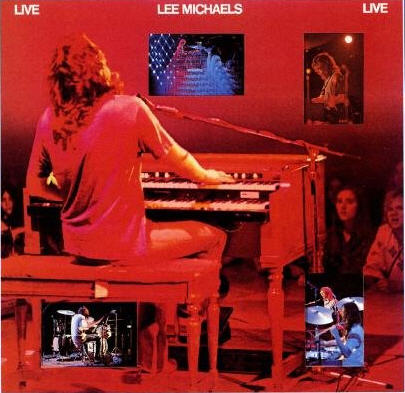 As a follow-up to the highly successful “5th," Michaels wanted to do something radically different, in part because he wanted to undo his recently acquired popstar image, and in part to play some guitar – something he had wanted to do for some time, in hopes of refueling his creative energies. For Space & First Takes he assembled a full band again, with Drake Levin back on board as primary guitarist, Keith Knudsen (later of the Doobie Brothers) on drums, bassist Joel Christie, with Micheals covering second guitar, organ, piano, and vocal. There are only two songs per side on the LP, the shorter “Own Special Way” and “Hold on to Freedom” opening the respective sides, each which was filled out by an extended full-band jam piece. The album is quite good, especially if one likes 13 and 16 minute cuts with a lot of improvisation. Radio didn’t like it, nor did his label, which gave it it no promotion, and was the last nail in the coffin for his relationship with A&M. He still owed them one album, but had already signed a deal with Columbia going forward.

The final album in this set, Live, was a double LP set that is in fact one of his best to date, recorded on the Space & First Takes tour, with only Michaels and Keith Knudsen, collecting much of his best material from his second album forward. Why his biggest hit “Do You Know What I Mean” was not included in the set is a question only the label can answer, because according to Michaels it was played at every show after “5th" hit the charts. So there you have it, all seven albums he released for A&M in one package.

Yatha Sidhra - A Meditation Mass – Considered by most a classic, this album was very recently put out by The Laser's Edge. One of the most unique and interesting Krautrock releases of the seventies, "A Meditation Mass" is a four part...  (1993) » Read more

Who Says Fine Cuisine Can't Come from a Microwave?