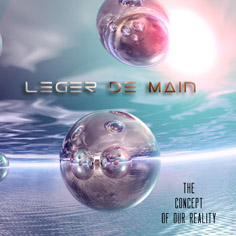 [Note: This review was written of the original release.]

Here is an album worth getting excited about. Leger de Main, based in Ohio is simply a trio, brothers Brett and Chris Rodler handle drums, and every- thing else respectively (and respectably as well), while vocalist Melissa Blair ties it all together with an outstanding voice and great lyrics. Musically, their sound is based firmly in rock, full of complexities, mood shifts and atmospherics, with plenty of parallel influences. Some allusions to Rush exist throughout their music, yet they do that style infinitely better, with more emotion, thematic variation and conceptual development. If Rush really were a progressive band, they might sound like Leger de Main. (Now I suspect an army of angry Rush-heads are getting ready to kick my ass for saying that...) They are masters of arrangement and studio technique as well, who can vary their sound from a measured support for the vocals to a dense wall of keys and buzzing guitars, all within seconds of one another — and still do it gradually without calling attention to the change itself. Their music rips and roars aggressively when it needs to, and softens to a pastel vignette to showcase the vocals and lyrics. Even more impressive is when both elements are at full throttle, as on the opener "To Live the Truth." More exploratory is "Enter Quietly," which moves through a multitude of changes along its twenty minute journey. My only concern is how (with all the multi-tracking) they can pull it off live, and if they can't, will they survive? Either way, this is certainly one of the best debut releases in recent memory.

Ars Nova Biogenesis Project - Biogenesis – Biogenesis is the kind of overblown sci-fi epic that has both a built-in audience and legions of detractors. The fact that it comes from Japan’s Ars Nova, not exactly known for subtlety, does...  (2003) » Read more