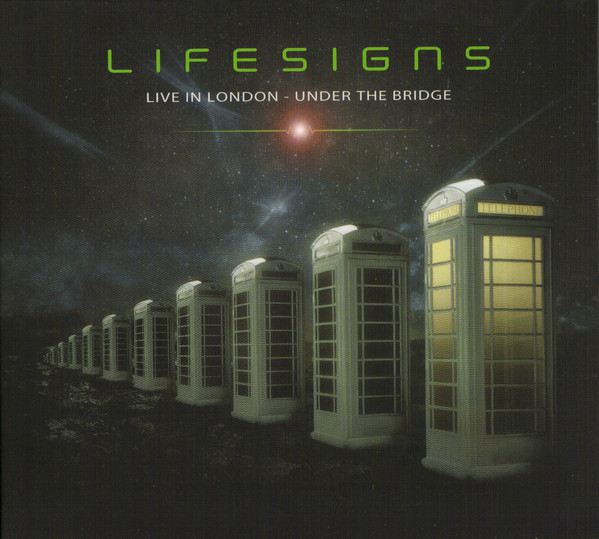 I’m not sure if it was rediscovering IQ and Marillion, or discovering Big Big Train, or perhaps a whole combination of things, but my interests, in part, have gravitated towards modern English progressive music of late. I find this an interesting subject in particular as progressive rock and pop music are often considered at odds and yet so many newer UK groups performing symphonic rock do so with just as many nods to the Beatles and their lineage, incorporating influences from the Electric Light Orchestra, Supertramp, Alan Parsons Project, 10cc, and others. You wouldn’t think that this sort of songwriting would necessarily fit in with Gentle Giant-like complexity and heavier progressive moves, but John Young’s Lifesigns demonstrates that not only can these two styles coexist, they can actually elevate each other.

Over the last year I grabbed both Lifesigns studio albums and enjoyed them both. But I do find it a powerful thing to be able to see a band play live, there’s something cool about getting to see a bit of how. Lifesigns have gone through some personnel changes at the guitar spot. Under the Bridge introduces one to the window of time guitarist Niko Tsonev was in the group, a player so good you would wonder how they could ever possibly replace him. Well, until I heard his replacement was Iona’s incredibly talented Dave Bainbridge. Yeah, the pedigree in this band is sky high, every chair manned by a talented player and singer.

Having been released in between the two studio albums, this live album (which you get on CD and DVD) covers the first album with the upcoming new material from Cardington. The live renditions of the first album show a band gradually adjusting and improving the material considerably, but the huge change definitely comes hearing Tsonev’s first solo in “Lighthouse.” It’s like someone with Holdsworth's chops giving the Gilmour or Rothery playbook a go and sent me back to the liner notes on the first album (wow Steve Hackett was on this? Cool). “Telephone” is perhaps a signature track by the group, not only in that it’s such a solid balance between well crafted hooks and progressive rock, but the telephone box(es) on the cover (modern and not like a TARDIS) also give it a way a bit. I absolutely love the way the bass groove, the group vocals (often split and working in harmony) and wistful vibe come together on this one, it’s a testament to how strong the songwriting is.

As the set continues, (then) upcoming material from Cardington starts to become previewed and it all shows a momentum starting to roll, the songwriting and instrumental ideas starting to pour out with the inspiration. The energy is really kept high by Jon Poole’s physical bass style throughout, think of it perhaps as a punchier take on Tony Levin circa So era Peter Gabriel. Young weaves all kind of beautiful melodies in from the synthesizers with just the right touch of Tony Banks and does so effortlessly. Even when the band is performing complex instrumental material they can start dropping in clever vocal hooks and it just reminds me that even in the 70s the best symphonic rock was that way because of its memorability. “Impossible” is just a perfect example, the type of hook that can stick in your head for days but not bug you while it’s doing it. “Fridge Full of Stars” is a loving tribute to classic Yes and the finale here and on the debut, “Carousel,” really shows that the band can write the tricky, multi-part longform piece as good as anyone out there at the moment.

I found Under the Bridge a revelation and it sent me back to the studio albums with much greater understanding of and appreciation for the material. In fact, if the band decided to crowfund another set like this I’d be all in at the beginning. This is just a brilliant, if not flawless set, played by a band who clearly love what they’re doing and do it well.

Brainstorm - Liquid Monster – This is German metal quintet Brainstorm’s seventh release to date and finds them in a more traditional frame of mind than most metal coming out of Europe these days. It seems that everyone else has...  (2006) » Read more