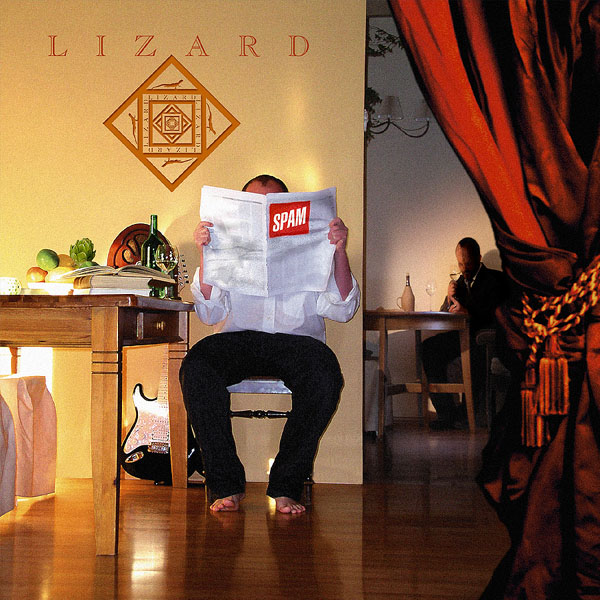 Lizard is a Polish “neo” band influenced by King Crimson and UK originally. After 1996’s W Galerii Czasu and a subsequent official bootleg, they laid low for a few years only to put out three albums in the last three years (Psychopuls was reviewed in issue #31 and I think we totally missed last year’s Tales from the Artichoke Wood). They have gotten heavier over the years, with omnipresent distorted guitar as background texture, and lots of keyboard leads with similar timbres. Violin features prominently in the solos, and they can sound a bit fusiony when the violin is leading with the other instruments as support. Good Polish vocals throughout, often in an anthemic context. Compared to Psychopuls, Spam is a much more original work. The Crim influence is more subtle this time, most apparent when the eleven-minute closer spotlights a five-minute instrumental reminiscent of Crimson’s “Fractured,” with angular guitar pattern as a backdrop for piano and violin. You can also pick out an homage to “In the Dead of Night” in the opening track, in the rhythmic structure of the solo over an extended-meter riff, but in that case if you didn’t know the band were fans of UK it would be easy to miss. So generally speaking Spam is a pretty good offering and makes a nice foil to W Galerii Czasu in the band’s outfit.

Crack - Si Todo Hiciera Crack – While in countries like England, Italy and the United States, the outlook for progressive rock by the late seventies was practically at its bleakest; Spain's scene was at its most prolific stage. ...  (1994) » Read more