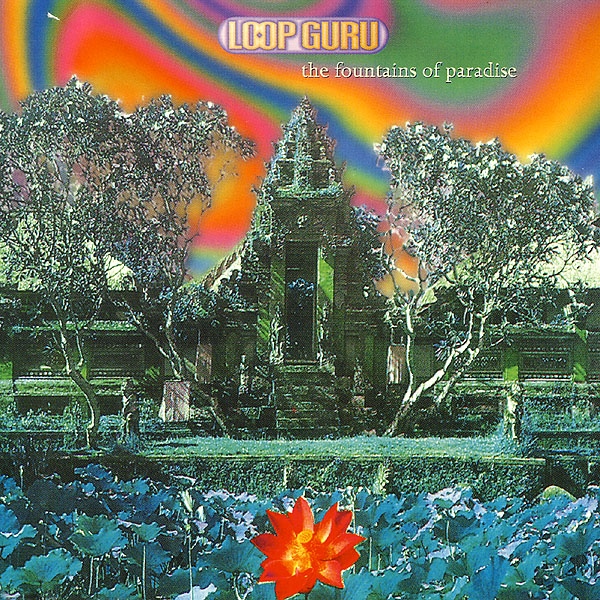 Loop Guru got started in England in 1992 as a collaboration between Salman Gita (Sam Dodson) and Jamuud (Dave Muddyman) to experiment with tape loops, samples, and world beat rhythms. Over the years, they’ve released music in both ambient and more conventional poppish styles. They also sold items called The Catalog of Desires at their shows, which were even more experimental. The three volumes of that series have been reworked into The Fountains of Paradise, now available for general consumption. In many ways, listening to this CD is like tuning in on some cosmic bandwidth on which all the sounds of the planet Earth are broadcast continually. Loop Guru merely twiddle the frequency dial, presenting Indonesian percussion, Middle Eastern singing, muted hip-hop beats, echoing violins, burbling water, spoken words, whale calls, many unidentifiable noises, and very few conventional musical instruments. This genre – arranging sounds into aural collages – probably stretches the boundaries of what can be called music for many people, and borders on plagiarism to some, but it is a truly significant modern development, one of the real contributions made in the last few decades to the history of music. The definition of performance has been expanded from the idea of a people playing instruments, be it with hands, breath, or whatever, to people arranging sounds, regardless of how the sounds were originally produced. On a certain level, a note from a piano, the rattle of a jackhammer, and the twitter of a tropical bird are all equal, all worthy of inclusion in music, and it is this esthetic to which Loop Guru aspire. It is a different sort of complexity than conventional composition, but the density of Loop Guru’s creations can easily sustain repeated listenings – there’s always something more to be heard.