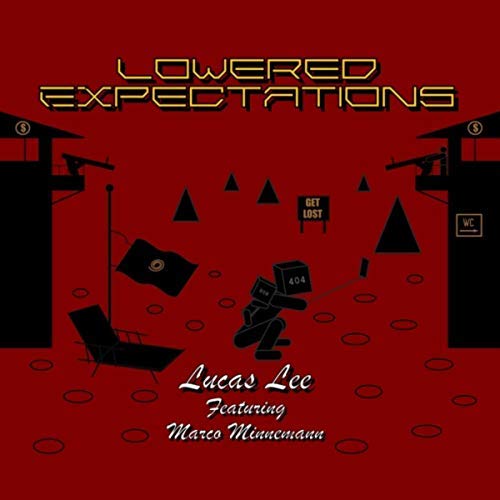 Although it may seem odd, the theme of this album is about the attitude of setting lowered expectations in a world where we often engage in edless speculation about who is the best, the MVP, the greatest of all time, the number one, the leading scorer, the greatest player — it’s sort of as if nothing else really matters. While the main thrust of the music here is primarily instrumental with all instruments except the drums played by Lucas Lee (guitars, basses, keyboards, violin, etc, and random distorted voice-overs and spoken bits that in various ways underscore the theme of the album, though not to the detriment of the musical angle), and playing the drums and in the producer’s chair is none other than Marco Minnemann, as he did on Lee’s previous 2017 full length album Acceptance of Gravitational Collapsing Manifestations (which was his fourth album overall, previous releases featured drummers Tobias Ralph and Pat Mastelotto). To say Lee is a hotshot guitarist is a given, but the six tracks here are not the same repetitive tripe one would expect from a guitarist at play in his own studio; although his instrumental prowess is evident on every track, it’s his compositions that shine the strongest in this setting, lengthy, convoluted and complex, this is prog-rock of the highest order, influenced somewhat by jazz elements and fusion, as well as angular harder rock bits with wacky track titles like “A Jester’s Gesture,” “Grateful to Entitled to Disrespectful” and the amazing album closer “Please Do Not Squat on the Toilet Seat.” Wherever you drop the needle you can be assured that whatever is happening right now is certain to totally change directions within the next few measures. As an album of twisted, hypercreative compositions, Lowered Expectations is hard to beat, though (as with any great instrumentally driven progressive rock) it’s not going to reach out and grab you by the jugular on the first listen, but instead reel the listener in slowly over many repeated spins. And that’s what gives Lee’s music its staying power.