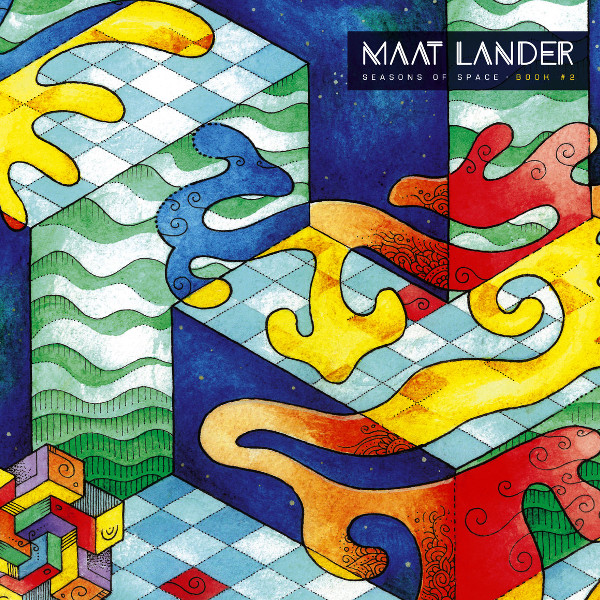 Digging a little deeper into these recent Russian releases, their musical community appears fluid, with musicians coming together in different combinations, groups, and styles. For instance, Arkadiy and Ivan Fedotov from Vespero and Ilya Lipkin from The Re-Stoned record and perform as Maat Lander, more of an electronic music group than Vespero’s space rock and The Re-Stoned’s head banging stoner rock. You really need something like the old Gong Family Tree to keep abreast of all that is happening. Maat Lander’s new album, Seasons of Space Book #2 is the second volume of the Seasons of Space series and continues the story of Maat Lander, a fictional eccentric demiurge, who is bored by traveling in space and decides to explore the microcosm. Using guitars (electric and acoustic), bass, synths, drums, drum machines, and samples, Maat Lander creates an electronic space prog amalgam with influences from the Ozric Tentacles, Klaus Schulze and other Berlin School artists, Cosmic Couriers, and Acid Mothers Temple. Seasons of Space Book #2 delivers a consistent stream of musical ear candy. My favorites include “Meteors Serenade” that builds slowly from abstract Schulzian soundscapes through Cosmic Courier experiments to cosmic freakout; “Quantum Ballad” with it exquisite acoustic guitar, cosmic organ, and Spanish guitar solos; “Space Scum” that slowly ensares you with gritty, gutsy guitar shredding, building to an Acid Mothers sonic barrier modulated by quiet ambient passages; and the album closer “The Asteroid of Living Machinery” built on loops of bass, guitar, drums, and electronics that resolves itself into an all space prog jam. Vespero and pals are breathing new life into this musical genre.