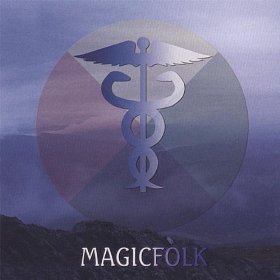 Like the bright sun burning through the morning fog, Magicfolk come bearing tradition, vision, passion, and mysticism. On this, their debut, the seven-piece is blessed with the beautiful lead voice of Michelle Glover (who also plays acoustic guitar and handles much of the composition), and backed by two additional female voices within the band (guitarist Vicky Grady and Josephone, who doubles on flute, sax and bass clarinet). The four remaining players handle keyboards, lead guitar, bass, drums and percussion. The material here was written and recorded over a five year period, and many of the songs feature players and vocalists from earlier versions the band, plus some guests also; even as such, the result is surprisingly consistent across the twelve pieces presented. Stylistically, they are somewhere between the late-sixties West Coast folk-rock sound (think PBC or earliest Airplane) and the British progressive folk-rock of the late sixties and early seventies, though one might hear many similarities to the early (pre-symphonic) work of contemporaries Iona. These ears often hear a sound reminiscent of the British progressive band Solstice on their early outings Silent Dance and New Life. "Heliopolis" is a case in point: after the first vocal section, the band revs up for a restless workout on multiple guitars with bass clarinet that would make the crimson king proud. The blood-curdling screams on "Furies" that give way to a blistering guitar lead is another. All taken, an excellent slab of modern British folk-hippie-rock that most will enjoy.

Steve Howe - The Haunted Melody – The Yes/Asia guitarist realizes a lifelong ambition by creating the perfect jazz setting with son, Dylan Howe on drums and Ross Stanley on Hammond B3. The arrangements across the stellar recording...  (2009) » Read more