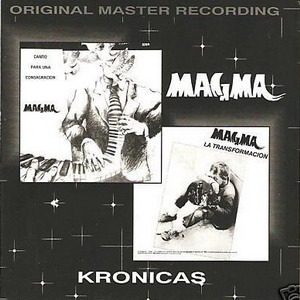 Not to be confused with the Kobaian ensemble led by Christian Vander, of course, this Magma was a symphonic progressive band borne out of the same Argentine music underground that produced MIA and Redd, among others. Kronicas anthologizes two of Magma's three albums: Canto para una Consagracion (1982) and La Transformacion (1985). Fronted by the unusual high-pitched vocals of Albert Felici, Magma created a unique variety of progressive mixing light symphonics with Andean folklore and a touch of jazz. While many other Argentine bands (e.g.- Crucis) could easily be mistaken for European groups, Magma's sound is distinctively Argentinean. The band's most unusual feature is the startling counter-tenor voice of Alberto Felici. His voice is very strong, very Latin, but may be a bit too overpowering for some. Instrumentally, the most prominent instruments are keyboards (primarily piano, with splashes of synthesizer) and flute, with guitar and percussion lending color and texture to the music. Of the two albums, Canto is primarily vocal, while La Transformacion is mostly instrumental. Both are superb, though. A worthwhile reissue.

Olov Johansson - Storsvarten – Olov Johansson plays an ancient instrument called a nyckelharpa, which is related to the violin and hurdy-gurdy, and is traditional is Sweden, though not much played in the current day. It looks...  (1999) » Read more