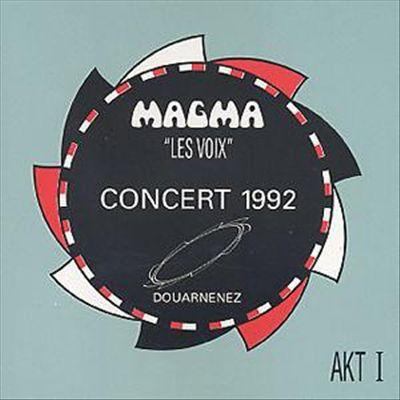 Magma's Christian Vander has decided to follow in the footsteps of Frank Zappa, Andy Latimer, and others in an effort to fight the bootleggers, and has started his own record label AKT to release live shows and other special material from his own personal archives. Les Voix is the first release on this label, recorded at the Douarnenez concert, August 2, 1992. The lineup at this point featured Christian (vocals, piano & drums), Simon Goubert (piano, keys), Pierre Michel Sivadier (keys), Philippe Dardelle (contrabass), and in keeping with the title ("The Voices"), Stella Vander and seven other vocalists grace this show with a constant flow of high energy choral work. As might be expected from this mostly acoustic lineup, the musical style here is more in keeping with the recent Offering
albums than the early Magma of the 70's; drums are used only sparingly.The album's four tracks include three from the vintage years: "Ëmëhntëht-Rê," "Zëss" and a sixteen minute version of "Wurdah Ïtah"; in each case the chorus has been used to implement the parts originally done by guitars and synthesizer. The end result is nothing short of stunning. The recording quality is superb, it's easy to forget this is a live one!

Les Voix was the debut release on Christian Vander's AKT label, created in order to make available various live Magma recordings that had been gathering dust in Vander's archives. This was a bit of an odd one to start with, considering it hails from a 1992 concert which featured an almost exclusively vocal lineup and no electric instruments. The performance, however, is stunning, and this rather delicate lineup still imbues the music with Magma's characteristic emotional intensity. The CD opens with "Emehnteht-Re," a mysterious, ethereal piece performed by a choral octet accompanied by a lone piano. The cheerful second track, "C'est Pour Nous," comes from one of Vander's Offering albums, and gives him a chance to show off his vocal skills. The final pair of tracks, each around 16-17 minutes long, present excerpts from two of Magma's longer pieces, "Zess" and "Wurdah Itah." These haunting acoustic versions are deceptively restrained, revealing an expressiveness and power equal to any of Magma's electric lineups. Recorded straight to digital at the concert, the sound quality on this disc is superb.

Not so much a true Magma album as it is a choral interpretation of some old Magma music. With no less than nine vocalists (led by Christian and Stella Vander), the choir (about half male, half female) is lightly backed by two pianists / keyboardists (Pierre Sivadier and Simon Goubert), Philippe Dardelle (contrabass, from the Christian Vamder Trio and Offering albums too) and Vander himself (drums, piano) in what is a very acoustic, very airy-sounding set. The bootleg quality sound grows a bit tiresome, but the highlights of the four tracks included make it worth the money for the diehard Magma fan. Those highlights are the excerpt from "Zess" and the short (well, fifteen minutes) summary of "Wurdah Itah." The sparse instrumental backing paired with the dense vocal arrangements will take some getting used to. The real thrill is the apparent interest Vander still has for this music in the 90s.

Bondage Fruit - V: Skin – These Japanese explorers find themselves in a rather minimalistic mood for their fifth release, presenting two long tracks of fairly sparse music. The title track is nearly thirty minutes of a very...  (2003) » Read more

Fukkeduk - Ornithozozy – Well the name may cost this group some listeners, but I guess it could be said that anything in the Art Zoyd / Univers Zero axis may do the same anyway! Fukkeduk sure aren't shooting to be popular...  (1996) » Read more

Caryn Lin - Honour the Rain – Caryn Lin is a violin player who plays on one track of the Project Lo disc. Here, on her solo album, we find overdubs of echoed pizzicato and such over which a rather spatial violin flies....  (1996) » Read more

Bi Kyo Ran - Live Vol. 2 - 3 (Who Ma & Ran) – After a three-year period (spent mostly making demos and being discovered by King Records), Suma appeared with a new band behind him. King coaxed him into the studio, and the albums Bi Kyo Ran and...  (1996) » Read more

Various Artists - Montreal Sound Matter / Montréal Matière Sonore – Experimental and Avant-Garde are words that should be used loosely for they reach far too wide. On the surface, that is evidently what we have here in this conglomeration of mainly Canadian artists....  (2007) » Read more