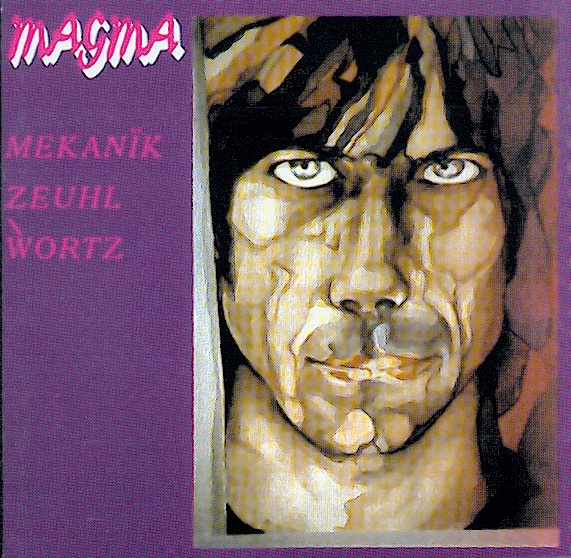 A two CD set, this contains the second half of the concert begun on Theusz Hamtaahk. The first disc features a stunning and powerful rendition of "Mekanïk Destruktïw Kommandöh," which unfortunately fades out several minutes before the end of the piece is reached. Still, this is in the running for the best version ever released. Paganotti's heavy bass gives the piece a relentless momentum, and his overwhelming solo continues for more than 11 minutes before giving way to Didier Lockwood's violin. The second disc contains lengthy versions of "De Futura Hiroshima," a Jannik Top piece to appear on Üdü Wüdü, and "Ëmëhntëht-Ptâh," an extended Christian Vander drum solo. While 25 minutes of drum soloing may get a bit tiresome, this is a welcome inclusion as the only Vander drum feature ever released. The sound quality on both Theusz Hamtaahk and Mekanïk Zeuhl Wortz is quite good, especially considering the age and the source of the recordings.

Here's one of those unbelievably powerful Magma concerts that's been circulating on cassette for years, finally cleaned up and transferred to CD. Hallelujah! This is one of the best live shows around, recorded March 2, 1976 at the Opera, Reims, France. In addition to Zebehn Strain De Geustaah (Christian) and Tauhd Zaia (Stella), the lineup at that point in time included Klotsz (Klaus Blasquiz) on vocals, Didier Lockwood on violin, the dual keyboards of Benoit Widemann and Patrick Gauthier, Gabriel Federow on guitar, and bass-monster Bernard Paganotti who stole the show on almost every track that night. This is a 2CD set, the first disc containing a 42 minute (and unfortunately prematurely truncated) version of "Mekanïk Destruktïw Kommandöh." This is perhaps one of the most gripping versions of this track I've heard, at least equal to the version on the Retrospektiw 1 & 2 album; Wurd (Paganotti) begins showing off his chops about halfway through in an apocalyptic duel with Federow, gradually increasing the speed and tension in a fight to the finish that ends in pure chaotic madness. The track fades at 42:00, a couple minutes short of the applause, presumably because the tape ran out. Still, this one's a stunner. Those who enjoyed "De Futura" on Üdü Wüdü, but wished for more - well, here's the more: disc two opens with "De Futura Hiroshima," a full twenty-five minutes of it, this time with Paganotti instead of Janik Top. Needless to say this one is a smoker as well, as one might well imagine - more of the Paganotti-Vander-Federow rave-ups, and plenty of support from the others. Disc two closes with "Ëmëhntëht - Ptâh" which, after the short intro, turns into a legthy 20+ minute drum solo by Zebehn himself, and I believe the first time the whole thing has been captured on record or CD. If you enjoy a great drum solo you’re bound to enjoy this; if not, consider it a bonus track, as the other two alone are certainly worth the cost of this set. A must have for all Magma fans.

Pineapple Thief - Variations on a Dream – I hope I don’t turn anyone off by saying Pineapple Thief has as much in common with Radiohead, Coldplay, and Smashing Pumpkins as they do with anyone in the prog community. In my book,...  (2004) » Read more

Panzerpappa - Koralrevens Klagsang – It’s been a few years since anything new from Panzerpappa has crossed this desk. Skillful denizens of the playful Canterbury-esque jazz-rock realm, the four-piece has undergone some changes...  (2007) » Read more

I.E.M. - I.E.M. – The Incredible Expanding Mindf*ck is one of Steven Wilson’s (Porcupine Tree, No-Man) side projects. The goal of the original IEM album from 1996 was to do an anonymous Krautrock project. The...  (1999) » Read more

Martin Barre - Stage Left – In addition to his twenty or thirty albums with Jethro Tull, guitarist Martin Barre has recorded three solo albums. Each of the 14 tracks on this, his third, features a different instrument —...  (2004) » Read more

The Gathering gets all atmospheric and stuff