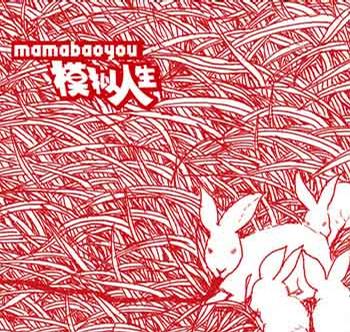 Mamabaoyou is an instrumental band from Dalian in northern China, which is also home to the more well-known Wang Wen. Oddly enough, although the band’s name sounds Chinese, it is never written in Chinese characters to give a clue to the meaning. The album title means “Imitation Human Life” – it consists of five tracks, less than 40 minutes of music, but provides quite a bit of variety, from aggressive rock to odd atmospheric and experimental bits. Although the instrumentation is your basic two guitars, bass, and drums, the overall impression is of more diversity, since the players don’t stick to the same tones all the time. Sometimes the bass has a punchy fuzz attack, sometimes one of the guitars will swirl in a stream of effects; there are even times when it sounds like parts have been reversed. I think there’s a bit of uncredited synthesizer on one track. Compared to some of the more gentle post-rock bands, Mamabaoyou positively rocks at times. Maybe it’s really better to leave aside the whole “post rock” thing and just call it instrumental rock. They are a far cry from math rock, though close attention will reveal the occasional change in time signature. I especially like the section in 3/4 that finishes of the last track, “How Many Happy Nights Like This Do We Have Left?” I’m not sure if this band is still a going concern, but if they can keep this level up, they deserve to be.

The Grand Trick - The Decadent Session – To tell you the truth, I have a difficult time getting into this music. I have made several attempts to listen to this CD, but I was never a real big fan of heavy rock music, even in the seventies....  (2006) » Read more