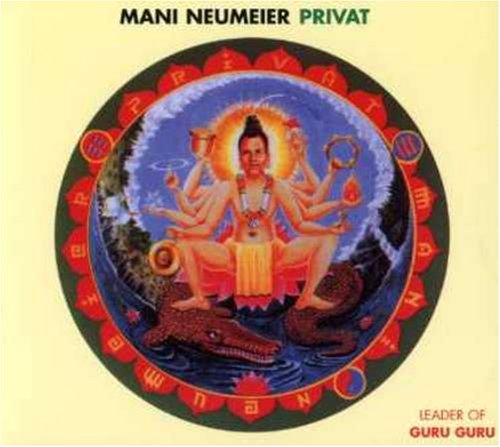 Guru Guru drummer Mani is still going strong, to which two recent Japan visits will attest. Through the 80s and 90s he has kept busy with projects such as L.S. Bearforce, and Tiere de Nacht. This solo release brings us to 1993. Now an album of drum-based music may not be everyone's cup of tea, but Mani has done his best to insure at least that the eighteen separate pieces give the listener a good variety of styles and approaches. One thing that was revealing for me was his softer side, which finds him visiting territories previously mapped out by Yas Kaz, if you want to stretch the imagination. There are also some experimental moments in which he mixes in found sounds, voice, and sequential patterns. Along the way some interesting combinations come flying out of the woodwork. Ghanaian drums (or what sound like such), are used on one track, for a tribalistic air, backed by finger cymbals, something that would of course never happen in the indigenous environment of these instruments. Another unorthodox method was his way of using steel drums to simulate a Balinese gamelan effect. Counterfeit ethnic music though it may be, it is effective nonetheless. My favorites were the quiet percussion solos emphasizing bells, cymbals, rainstick, and bird sounds. Mani's drum kit has a unique and identifiable character which he exploits magnificently: with a plethora of tuned tom-toms and bells and you can almost hum the melodies he seems to be implying once he is let loose upon the skins. An album like Privat is every drummer's dream. While the audience for such is diminutive, most of the material is quite appealing and non-experts can still find plenty in here to sink their ears into.